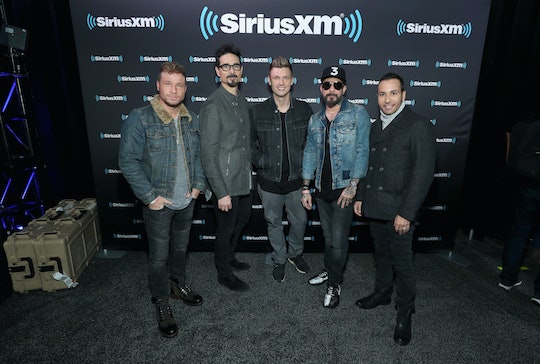 Backstreet's back, and in Grammy-nominated form, too! Perhaps even more epic, though, is the fact that all five Backstreet Boys and their wives were at the Grammys together, which sounds like it was a pretty amazing parents' night out.

Granted, the iconic boy band (er, man band) is having a pretty amazing year, period. With their new album DNA, the group is back in the number one spot on the Billboard Album Chart for the first time since 2000, as Amp Radio reported. That would be enough of an achievement right there, but after 26 years together, the group was nominated for yet another Grammy this year: Best Pop Duo/Group Performance for "Don't Go Breaking My Heart" (pitting them against such competitors as Christina Aguilera featuring Demi Lovato, Tony Bennett and Diana Krall, and Lady Gaga and Bradley Cooper).

Still, award or no award, the fact that the whole gang and their wives made it out for a fancy evening sans kids... well, that was its own reward, truly. As Nick Carter admitted during a red carpet pre-Grammys interview, “Once we’re off the stage, we’re just dads and fathers,” and listed such exciting tasks as grocery shopping among their “normal” non-Backstreet Boy activities. When each BB is on his own, apparently, it's easy to live life in a fairly incognito manner... but when they're together, well, that's when they get noticed. Makes sense. If you looked over and saw a guy who looked like A.J. McLean at the other end of the produce section in Whole Foods, you might shrug and go back to gently squeezing avocados. But if you looked over and saw a group of guys who collectively resembled A.J., Nick, Brian, Kevin, and Howie, you'd be freaking out.

Obviously, showing up as a group to the Grammys is all about getting noticed, and all the Boys and their Girls definitely rose to the occasion. Check out how adorable they look hanging out together before the show, posing for a group photo:

Aww, how sweet is that? It's so apparent in this photo that above all else, these guys are friends who grew up together and will always have each other's backs. Seriously, doesn't this remind you of a photo you'd see on your Facebook feed of your friends from high school getting ready to go to their 20 year reunion? Another fun fact from their red carpet interview — apparently, group consensus is as follows: Of all the Boys, Nick has changed the most in the 26 years they've known each other (of course, he was only 12 when they met) and Howie or Brian probably changed the least. So intriguing... really makes you want more details, doesn't it?

Given how well these guys know each other, it must make all their latest successes that much more meaningful. Take, for example, their recent Super Bowl spot, a Doritos commercial that managed to make "I Want It That Way" relevant yet again (if it ever stopped being relevant?). Can you imagine what a win that must have felt like, after all this time? The awards just keep on coming for these boys. And this time, they got a fun couples' night out of the deal!