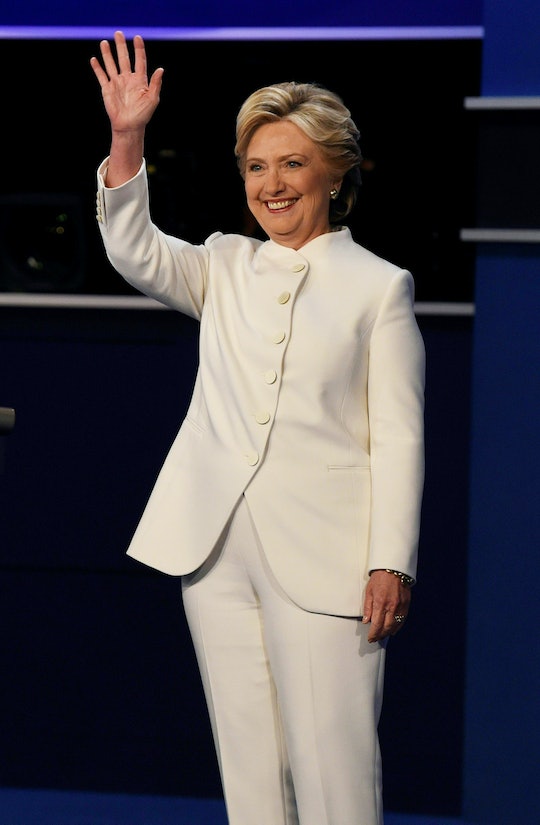 All Of The Things Hillary Clinton Looks Like At The Last Debate, According To The Internet

Clinton has certainly taken the white pantsuit to a whole new level; not since the glory days of shows like Dynasty and Dallas have we seen such an amazing display of the power pantsuit; Crystal Carrington and the entire Ewing clan would bow down to the power of Clinton's white pantsuits.

Yes, Clinton killed it at the debate on Wednesday night at the University of Nevada. Yes, she was cool and calm and controlled, no matter how GOP presidential candidate Donald Trump goaded her or interrupted her or insulted her. Yes, she never broke a sweat. And yet it was that white pantsuit (with the fabulous buttons and great neckline) that truly won the debate. The internet might not always love her policies, but they sure had a lot of feelings about her white power pantsuit.

This final debate on Wednesday sees Clinton ahead of Trump in the polls at a cool 8 points. Her stellar performance in all three debates certainly haven't hurt her, even with the recent WikiLeaks email leak. Why? Because she knows her stuff. She was able to speak eloquently and passionately about her position on Planned Parenthood, for instance:

I strongly support Roe v. Wade, which guarantees a constitutional right to a woman to make the most intimate, most difficult in many cases decisions about her health care that one can imagine. And in this case it's not only about Roe v. Wade. It is about what's happening right now in America so many states are putting very stringent regulations on women that block them from exercising that choice to the extent that they are defunding Planned Parenthood, which, of course, provides all kinds of cancer screenings and other benefits for women in our country.

And what's more... the woman can wear the hell out of a Ralph Lauren pristine white pantsuit. Honestly, it helps:

Although, that white pantsuit could be interpreted differently, I suppose.

While some might see the white pantsuit as cold and remote, here is how some of us see it:

The white pantsuit signifies, for some of us, a modern knight in shining armor. A woman who stays cool under pressure (and what an enormous amount of pressure that is) and looks amazing while doing it.

In other words, the white pantsuit will save us all.

Thank you for your time.