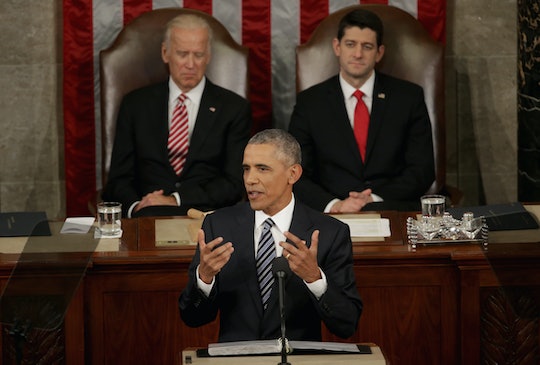 It's no secret that Paul Ryan, the Speaker of the U.S. House of Representatives, is no fan of President Obama's politics or policies, so no one was expecting him to applaud effusively during Obama's final State of the Union address on Jan. 12. However, Ryan, a staunch conservative, was feeling Obama's speech less than anyone expected. Like, way less. There were numerous moments during Obama's speech when it would have been polite — and possibly even politically expedient — to at least clap a little, politely. But Paul Ryan didn't clap during the State of the Union speech really, even in moments when it would have been polite. And let's not forget that the speaker sits directly behind the president, so he was on camera the entire time. Everyone saw you not clapping, Speaker Ryan. No one missed it.

As expected, Obama's last State of the Union speech touched on a range of topics, from inequality to climate change to the size and role of government to the very real prospect that Americans will manifest their fear and discontent in the form of xenophobia. There were, of course, moments when many of the Republicans in the room were expected to remain silent, and did — when the president talked about how climate change deniers will be very lonely, for instance, or strengthening entitlement programs. But Ryan didn't clap when Obama talked about initiatives that, really, it's hard to be against. Isn't curing cancer the sort of thing everyone, but especially politicians on national television, tend to be at least outwardly in favor of?

Ryan likely wanted to show that he's no-nonsense and can't be snowed over by Obama's charm or rhetoric. If that's the case, he certainly succeeded. Here are just a few of the things Ryan couldn't put his hands together for Tuesday night:

A National Initiative To Cure Cancer

Last year, Vice President Biden said that ... America can cure cancer ... Tonight, I’m announcing a new national effort to get it done ... For the loved ones we’ve all lost, for the family we can still save, let’s make America the country that cures cancer once and for all.

The bipartisan reform of No Child Left Behind was an important start ... In the coming years, we should build on that progress, by providing Pre-K for all, offering every student the hands-on computer science and math classes that make them job-ready on day one, and we should recruit and support more great teachers for our kids.

... we have to make college affordable for every American. Because no hardworking student should be stuck in the red. We’ve already reduced student loan payments to ten percent of a borrower’s income. Now, we’ve actually got to cut the cost of college. Providing two years of community college at no cost for every responsible student is one of the best ways to do that ...

If this Congress is serious about winning this war, and wants to send a message to our troops and the world, you should finally authorize the use of military force against ISIL. Take a vote.

Ryan did clap for a shout-out to the military, so he was willing to make some noise for service men and women at least. And there was a "golf clap" at the end that did not go unnoticed on Twitter:

One Twitter user had a theory for how Obama could have propelled Ryan to clap more during the evening:

Presidential candidates, file that strategy away for next year.