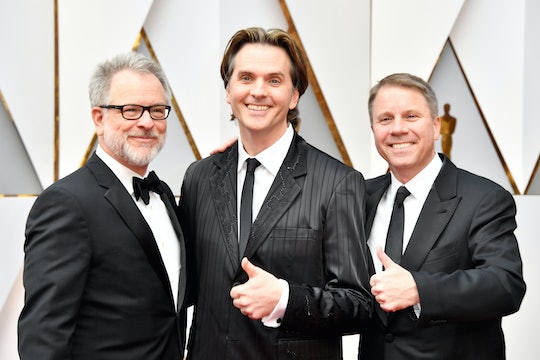 Hollywood Got Political At The 2017 Oscars

President Donald Trump may not like it very much, but Hollywood is definitely not going to stop making political statements on very public platforms. All the anti-Trump moments during the 2017 Oscars show that Hollywood is definitely not backing down, vitriolic Twitter responses notwithstanding. The political statements began with an ACLU pin worn by Ruth Negga on her heartstoppingly gorgeous red gown, and they did not stop. The red carpet interviews were not always as light as they generally tend to be, and many stars took the opportunity of stating their minds, from the creators of Zoolander to Wolfgang Puck himself. If this proves anything, it's that for all of Trump's crazed fear-mongering, the most visible people in the world are not going to stop spreading the opposite message of his, that love trumps hate.

We're sure to see some angry Trump tweets at some point (most likely in the wee hours of the morning) tomorrow, in response. At the Golden Globes, Meryl Streep accepted her Lifetime Achievement award and used her platform to deliver a beautiful, inspiring message of love and acceptance and the arts. While of course Trump promptly declared the most awarded actress of all time to be "overrated," her message was a beautiful and important one. And it looks like the stars at the Oscars are continuing to follow her admirable lead.

When discussing their film Zootopia on the red carpet before the show, Byron Howard, Rich Moore, and Clark Spencer said that their film was about inclusion and diversity. This is a movie about talking animals, by the way. "The message deep down inside of the film is that inclusiveness, diversity, trumps fear of the other every time. In light of world events right now, that's a really important message that can't be told enough right now," they said. "I think that the audiences have really grabbed on to that."

Wolfgang Puck got his own little barb at Trump in during the red carpet special on E. While displaying his Oscars menu, he said, "No matter what Trump says, we have a little Mexican influence."

Of course, host Jimmy Kimmel couldn't stop from saying something political in his opening monologue. It seemed at first like he was going to skate over Donald Trump, but that he definitely did not. He started his Trump digs by saying, "I'd like to thank Donald Trump. Remember last year when it seemed like the Oscars were racist? That's gone. Thanks to him."

He went on to tell Best Actress nominee Isabelle Huppert he was glad homeland security let her in tonight, and asked anyone from CNN or The New York Times to leave because we do not tolerate "fake news." And he also specifically called out Meryl Streep "for her many inspiring and overrated performances," in a direct reference to Trump calling her "overrated" after her Golden Globes speech.

He finished it up by saying, "Some of you will get to get up here and give a speech that the President of the United States will tweet about in all caps during his 5 a.m. bowel movement. And I think that's great." He even sent him a couple of tweets near the end of the show. Yeah, Kimmel was really not pulling any punches here.

The winner of the Best Foreign Language film was The Salesman, directed by Asghar Farhadi. His statement read, "My absence is out of respect for the people of my country and those of the other six nations who have been disrespected by the inhumane law that bans entry of immigrants to the U.S." It doesn't get much more powerful than that.

The Messgae After Sting's Performance

At the end of his performance of his Oscar-nominated song "The Empty Chair," a screen behind him read, "If I don't have the moral courage to challenge authority... We don't have journalism." Preach!

Another person affected by Trump's policies, Gael Garcia Bernal, took the opportunity as a presenter to say exactly what he thought about the political climate at the moment. "As a Mexican, as a Latin American, as a migrant worker, as a human being, I'm against any form of wall that wants to separate us," he said.

Now, all that's left to do is patiently wait until Trump tweets a response. I can't wait to see how he'll respond to all of them.