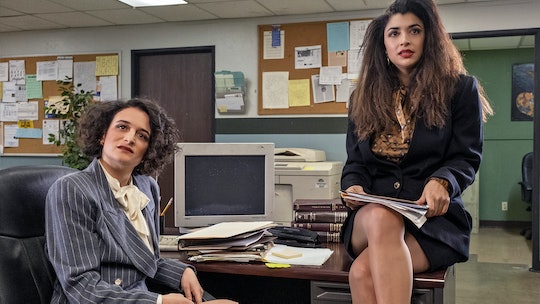 What a time to be alive. Following in the footsteps of Beyoncé, The Lonely Island — comprised of Saturday Night Live alums Akiva Schaffer, Andy Samberg, and Jorma Taccone — dropped a surprise visual album titled The Lonely Island Presents: The Unauthorized Bash Brothers Experience. The comedy trio created a 27-minute musical masterpiece, spoofing baseball icons Jose Canseco and Mark McGwire as '80s rappers. But the Netflix special wouldn't be complete without its long list of popular guest stars that definitely caught the attention of fans. In fact, all the cameos from Unauthorized Bash Brothers Experience prove just how wildly entertaining a Lonely Island "visual poem" can be.

The Unauthorized Bash Brothers Experience guest cast list is filled with familiar faces in the comedy circuit. First up, Hannah Simone (New Girl) and Jenny Slate (Big Mouth) made their Lonely Island debut in "Oakland Nights" as two office workers who go out with Samberg and Schaffer's renditions of Canseco and McGwire. The video is as uncomfortable as it seems, but just you wait. It gets even better. In the same song, Sterling K. Brown (This Is Us) makes a surprise appearance as "Chandelier" singer Sia. Brown lip syncs to a few hilarious verses about "silk robes and kimonos." And yes, I am still cackling.

Following a disturbing display of 100 cardboard cutouts of Kathy Ireland in "Focused AF", Jim O’Heir (Parks and Recreation) makes a brief cameo in "IHOP" as Mark at the puka shell store. In honor of Jerry Gergich — or is it Larry? — O’Heir's character is threatened by the visual album's leads.

The song is then quick followed by the appearance of Maya Rudolph (SNL), Stephanie Beatriz (Brooklyn Nine-Nine), and the girls from HAIM in "IHOP Parking Lot," where the ladies try to coerce Canseco and McGwire into shaking "those nasty butts" for a solid 153 minutes. Trust me when I tell you that this song will be stuck in your head for the rest of the day.

Although The Unauthorized Bash Brothers Experience is filled to the brim with guest cameos, neither Canseco nor McGwire actually guest starred in any of the music videos. However, after the visual poem/love letter dropped on Netflix, Canseco responded on Twitter, offering praise to The Lonely Island as well as a possible follow-up.

"Just watched The Unauthorized Bash Brothers video! I can't stop laughing. Loved it. If you want to do a follow up video contact my Manager Morgan," the former baseball player wrote, including his manager's phone number.

So could fans be seeing The Unauthorized Bash Brothers Experience, Part 2 in the future? Maybe, maybe not. At this point, only time will tell.

From Brown to Rudolph to Beatriz, every cameo on The Unauthorized Bash Brothers Experience made the ridiculously funny Netflix project all the more special. Seriously, how did The Lonely Island come up with this one? Regardless, the visual poem is something every comedy-lover should experience at least once in their lifetime. And TBH, I'm just happy to be along for the ride.