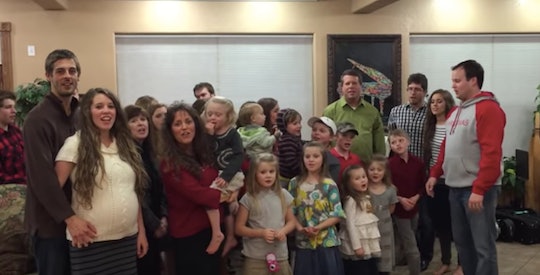 Here's A List Of All The Duggars Net Worths

The first seasons of 19 Kids & Counting largely focused on Michelle and Jim Bob Duggar's money saving tips. From the Duggar's obsession with coupons to Jim Bob's claim that he no longer uses credit cards, the large family has put forth the image that their relationship with money is very humble. Although it's probably true that the Duggars are frugal given the whole 19 kids thing, fans suspect they have more money then they'd like to admit. So, what are all of the Duggars' net worths? You might be surprised by the numbers.

Personally, I've always been curious about how the Duggars have handled all the money they've earned throughout the years. The Duggars' brand is built on being financially humble and living modestly, so it's interesting to consider how that meshes with the big salaries they've collected as reality television stars. If you look closely at their lives, you'll notice a lot of contradictions, like how they preach about buying clothes from thrift stores before jetting off to Central America for a missionary trip, for example. While it's no one's business how the Duggars choose to spend their money or how much cash they have, I think taking stock of their net worths is an interesting study in branding that shows how the Duggar family's money conscious image is likely more intentional than they'd like you to believe.

Now that I've given my two cents on the Duggar family's curious relationship to money, here are the married Duggars' net worths:

Jim Bob and Michelle's net worth is $3.5 million, according to Celebrity Net Worth. When 19 Kids and Counting was still on the air, Jim Bob and Michelle were reportedly raking in $25,000 to $40,000 per episode, according to Babble. Before their reality TV income, Jim Bob made a decent living selling used cars and dabbling in real estate, according to The Richest. As for what Jim Bob is doing now that his starring role on 19 Kids & Counting is over, I imagine he's back to running his multiple business ventures.

Josh and Anna's net worth is something that has always intrigued me, especially given his short-lived stint working for the Family Research Council. Although I don't know how much Josh made lobbying for the conservative group, I suspect it was a lot given the fact that he rented his former home in Maryland for $3,500 a month, according to the Daily Mail. Now that Josh is back to selling used cars in Arkansas, his net worth is $200,000 according to The Hollywood Gossip. I guess multiple scandals are pricey.

Although Dillard's net worth isn't exactly clear, he probably secured a decent nest egg while working as an accountant for Walmart. Dillard probably made $44,000 during his time at the retail chain, according to InTouchWeekly. Now that he's studying to be a minister and constantly asks for donations from fans, I don't think he's as flush as he used to be. As for Jill, that's also unclear. One can assume Jill has a decent amount of cash considering she co-authored a book with her sisters, and because of her Counting On paycheck.

Jessa and Ben probably have the most modest income out of all of the Duggars. When Ben first appeared on the scene, he revealed that he had a job repairing windshields, according to The New York Daily News, a gig he seemingly gave up for community college. Since Jessa is a homemaker, she probably lives off of the income she made on 19 Kids & Counting and what she currently pulls in on Counting On. As I mentioned earlier, the Duggars are estimated to make $25,000 to $40,000 an episode, which is typically split between the cast members. So, it's reasonable to think Jessa and Seewald have a good chunk of change to survive on.

Vuolo's estimated net worth is $500,000, according to Celebs Net Worths Now. The figure makes sense when you consider that Vuolo is a former professional soccer player, a career he ultimately gave up for preaching. Since preachers don't make high-paying salaries, one can speculate that Jinger and Vuolo live off of his nest egg and her reality television income.

Forsyth is estimated to be worth $700,000, according to Net Worth Post. I imagine the outlet based that figure off of Forsyth's home flipping business that he shares with dad, in addition to his work at the family's camp, the Fort Rock Family Camp. When you combine that with Joy-Anna's TLC cash, it looks like these two are sitting pretty.

Joseph's net worth isn't readily available, but there's speculation that he's working in the real estate business, according to The Inquisitr. If Joseph is successful, he should be able to support Kendra and his family. If not, Joseph has his reality television money to fall back on. As for Caldwell, I doubt she came into the marriage with a sizable inheritance since she's 19 years old.