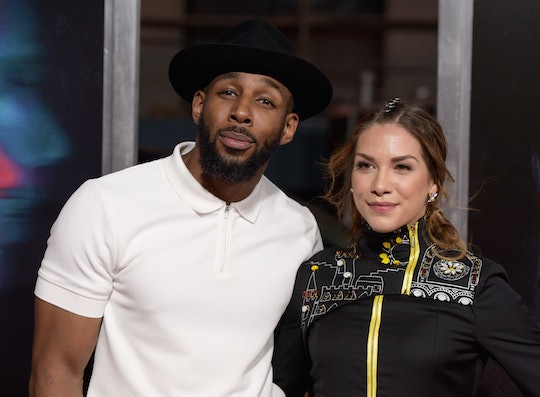 It may be uncomfortable to confront, but white privilege is very real. And to help demonstrate exactly what it looks like from two different perspectives, Allison Holker and Stephen "TWitch" Boss explained white privilege with such simplicity in a new video, it was devastating.

The Ellen DJ and former So You Think You Can Dance star were taking part in a new TikTok challenge called "Check Your Privilege" started by Big Mamma, a mom from Virginia named Kenya. The idea behind the challenge is that a person holds up all of their fingers and puts one down for every time they've experienced a situation.

In a powerful video documenting their answers with their 4-year-old son Maddox sitting on Boss' lap, the two stay silent as Big Mamma's voice is heard saying, "Put a finger down if you've ever been called a racial slur." Holker's fingers stay up, Boss puts one down.

Holker has not experienced any of these, Boss has. He's experienced so many racial injustices that he runs out of fingers and simply sits with his hands closed under his chin and the exhausted frustration on his face speaks louder than anything.

The threat of being killed by police violence is especially prescient right now as people across the country are coming together to protest the death of George Floyd, a Black man who died after a white officer knelt on his neck for nearly nine minutes.

White privilege is defined by Tolerance Tolerance, a project of the Southern Poverty Law Center, as an "invisible force white people need to recognize" and "being able to move through life without being racially profiled or unfairly stereotyped."