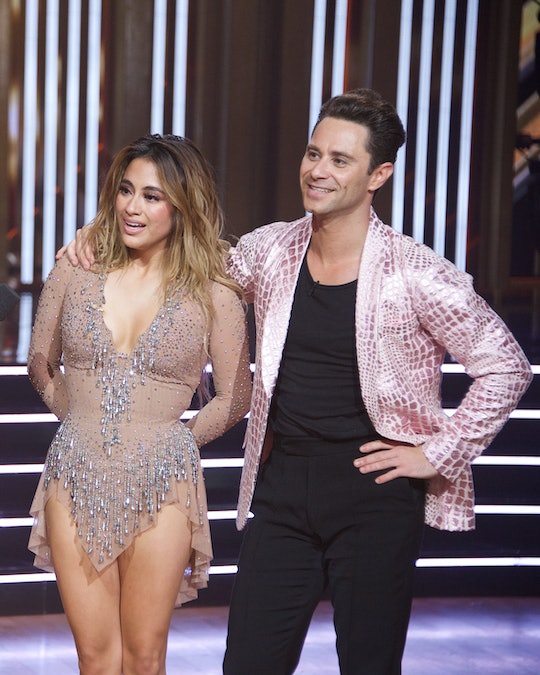 Monday night on Dancing With the Stars was movie night. Ally Brooke used the opportunity to not only honor the movie Selena, but also the late singer herself. Her dance earned her the highest score of the night up until that point, which was 24, and fans and judges alike were wowed. It was no surprise that Ally's tribute to Selena on DWTS won over fans and Ally is officially a frontrunner for the Mirror Ball trophy.

She explained during the episode that she has always looked up to the singer Selena as an inspiration and revealed that her family is even close with Selena's family now, years after the tragedy of her death. Ally also brought her pro partner Sasha Farber home to show him just how important the movie Selena was to her, growing up in Texas, just like Selena had in real life.

And as Ally danced with Sasha to Selena's song "Dreaming of You," it was easy to see just how important the song is to Ally outside of DWTS. Fans were quick to applaud her on Twitter and even those who don't necessarily love Fifth Harmony are now supporting Ally as a potential winner this season.

It's not clear just how close Ally's family is to Selena's, but she may have gotten closer to the family when she visited the Selena Museum back in March. At the time, Ally shared an Instagram post where she said she met Selena's sister and father, Suzette and Abraham Quintanilla, respectively, on a private tour.

"I don’t even have any words than can describe what this meant to me... today I got to meet Selena’s sister and father!!!" She wrote under photos from the museum. "After so long, looking up to them and Selena being my number one inspiration in life."

During Monday's episode, Ally said that Selena's sister even loaned her a hair clip that belonged to Selena to wear during her tribute dance. So as much as Ally's dance was meant to honor the movie Selena, it was also about how important the singer was and still is to her as a singer herself.

This isn't the first time Ally has shared a performance to pay tribute to her musical inspiration. In 2018, Ally performed Selena's song "No Me Queda Mas" at the Placido Domingo Opera. While that wasn't a dance number, it was another way Ally honored the singer, much like she did on DWTS Monday night.

Ally also opened up to People in 2017 about how she grew up in Texas with the image of Selena as a constant reminder of where she wanted to go in life.

"Selena is my angel," Ally said. "She is my biggest inspiration. Being from San Antonio, Texas, I really feel that connection to her because she had a lot of performances and a lot of her most iconic performances in San Antonio. Back in my hometown, we love her...We keep her memory alive."

Even if you have never heard a Fifth Harmony song before and didn't know who Ally was ahead of DWTS Season 28, it's clear to see how much of herself she threw into her week three dance. If nothing else, it will afford her the votes she needs to go with the judges' scores to keep her for another week.

But right now, Ally seems like she is on the fast track to finals and plenty of fans agree. Maybe it was her Selena tribute on DWTS. Even if it wasn't, though, it definitely got her the attention she deserves.