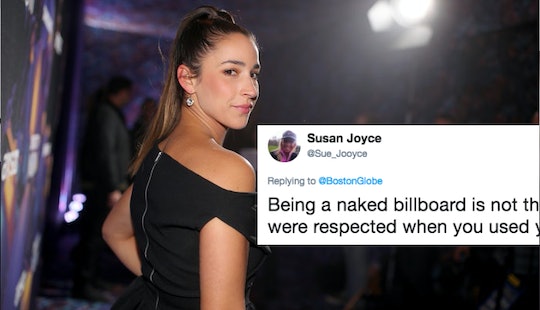 Olympic medalist Aly Raisman has been in the headlines a lot these days, and becoming more known to the world as a woman of substance through said headlines. As a tough, vocal sexual abuse survivor leading the charge against victim-blaming, Raisman has made a name for herself outside the gymnastics arena. And most people have been genuinely supportive of the work she's done recently. But when Raisman posed nude for Sports Illustrated's #MeToo issue there were plenty of people on the internet who were furious with her photo shoot. And honestly? This criticism pretty ridiculous and needs to stop right quick.

In the wake of Raisman's chilling testimony against her sexual abuser, disgraced former Team USA gymnastics doctor Larry Nassar, she took part in a new type of Sports Illustrated Swim edition. This new issue, inspired by the #MeToo movement encouraging victims of sexual abuse to speak out, is called In Her Own Words. And the concept is simple; giving women the space to share their stories... in their own words.

Raisman posed in several different bathing suits, but also posed nude with words like "trust yourself," "live for you," and "abuse is never okay" written all over her body. It was a powerful photo, particularly considering Raisman's intended message written along the side of her body, "Women do not have to be modest to be respected."

As powerful as many people have found Raisman's nude photo, others seemed to find it highly offensive. Oddly, many of the comments from people on her Instagram post sharing her nude photo seemed to be men:

"Isn't @si_swimsuit's target audience men? I bet they saw your situation and wanted to get some cash so they're exploiting it!" one commented.

Another wrote, "So it requires you getting naked for a magazine."

"Not sold on this either. Also, if you wanna be nude, lets see the goods!...lol," one more commented on the photo. "Really though, you ask not to be objectified, yet here you are in your birthday suit. SI doesnt [sic] care about you or your message, only how many people will buy their magazine."

But don't go thinking that men were the only ones to take umbrage with Raisman's choice to pose nude.

After everything the Olympic gold-medalist has gone through, suffering years of abuse at the hands of Nassar (who has been sentenced to 175 years in jail for his various sexual abuse crimes against 160 girls), as Entertainment Weekly reported, it seems unlikely that she will be fazed by critics on social media. Because this girl is far beyond being shamed, as Raisman explained to Sports Illustrated Swim:

I would like to remind everyone that being a survivor is nothing to be ashamed of, and going through a hard time does not define you. I hope that we can one day get to a point where everyone realizes that women do not have to be modest to be respected. We are free to draw confidence and happiness in our own way, and it is never for someone else to choose for us or to even judge us for that matter.

"We are free to draw confidence and happiness in our own way, and it is never for someone else to choose for us or to even judge us for that matter," she continued in her Sports Illustrated interview, explaining the spirit of owning your own space in her. "For me, 'In Her Own Words' serves as a reminder that we are all humans, we are all battling something, and it is OK to not be OK. We are not alone and we need each other."

So here's the thing; Raisman is right. You don't have to be modest to earn respect and she will not be defined by her troubled past. And if she wants to pose nude; it's her own damn business. Period.