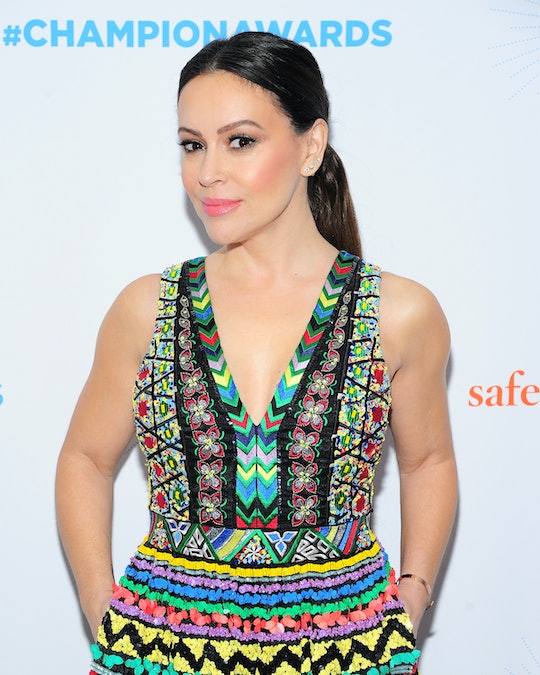 Alyssa Milano On Parenting: 'You Don't Know What You're Doing!'

Tonight's honoree considered bringing her 4-year-old along to help support victims of violence and abuse. “I tell them everything that I'm doing,” Alyssa Milano says of her young kids. “My daughter had the option of coming with me ... I told her what the night was all about. She's for it, but she decided to stay with my aunt. And, you know, I was fine with that!” Milano's accepting an award from Safe Horizon, and while she looks every bit the celebrity, her focus in being here is in making a difference; helping to fix the world her (our) children will inherit.

“It’s nights like this that give me hope,” Milano tells me as we stand on the step-and-repeat outside the ballroom of this midtown Manhattan event space: she resplendent in an Alice and Oliva gown from heaven, me a bit star-struck to be hanging out with Samantha Micelli, but keeping my cool as we talk about the important, lifesaving work the organization does and, you know, ~mom stuff~.

If you Google Alyssa Milano, you’ll see that “activist” is listed as often as actress. And while you might be able to easily recall examples of her advocacy since the 2016 election (from helping the #MeToo movement to go viral in 2017, to rallying Alabama voters against Roy Moore, testifying on Capitol Hill in support of the Equal Rights Amendment, and more recently, advocating for immigrant families at the US-Mexico border and giving Brett Kavanaugh the death stare we all wished we could be giving), she’s no newbie to using her platform to try to effect change. The actor/advocate’s first public stand for social justice dates back to the ‘80s when, at the height of the AIDS crisis, she kissed her friend Ryan White on the cheek on The Phil Donahue Show to demonstrate that HIV cannot be transferred through casual touch, as Milano explained in a speech at the GLADD Awards in 2018.

“I realized what being a celebrity and having a platform could mean, and the impact it could have on people’s lives,” Milano said of the experience in an interview with ELLE last December, adding that she sees that kiss as the start of her social justice-focused life.

We've had a lot of threats on our family.

Now the mom of two young children, Milano is also passionate about the work of Safe Horizon which, as she put it, “transforms victims into survivors.”

“I have a little girl and a little boy and I'm terrified of the world my little girl's going to grow up in,” she tells me. That terror may feel especially real and present to someone living in the public eye, using her voice in a way than often makes her a target of the kind of hate she is trying to fight. I wonder, does she ever worry that her outspokenness puts her family — her children — at risk?

“We've had a lot of threats on our family,” she acknowledges in a surprisingly matter-of-fact way. But those threats don’t deter Milano, nor do they scare her into trying to keep her children sheltered from the work she does.

Milano’s daughter Elizabella is 4, so the idea that she might be invited to an event hosted by the the largest victim-services non-profit in the United States, an organization that works to help everyone from homeless at-risk youth, to victims of sexual and domestic violence and sex trafficking, might surprise some.

“I wanted to give her the option of experiencing this,” Milano says, adding that it’s important that her kids (Elizabella's big brother Milo is 7) — whom she acknowledges have a “very cushy life” right now — understand that not everyone has it as good as they do. “I try to incorporate my kids as much as possible … in the work, because I feel like it's important for kids to realize their privilege at a young age.” Milano was a child star, and she says kids need to know that “life isn't always about lollipops and unicorns.”

Rather than shielding her children from her advocacy, or the reasons for her advocacy, Milano hopes to involve them, and impress upon them the value of living a life of service and leadership. “No matter what you do, and it doesn't matter if you're an activist or a CEO, if you lead through service and integrity, I don't think there's a way you can go wrong,” she says.

The world feels like a different place than the world of Who’s The Boss — and while this new generation of moms may be trying to do things a lot differently, Milano acknowledges that even for her, in her arguable fairly woke family, those entrenched gender norms still need uprooting.

Milano and her husband Dave Bugliari talk about the unconscious biases they bring to parenting often. They try to “reprogram those things that we fall back on, as far as identifying what masculinity is and looks like,” she says. “We're pretty self-reflective and evolved, and you know, my husband will still say things like, ‘Daddy's going away on a business trip — take care of your mom and sister.’ And I’m like, ‘You're imprinting this thought that we need help! Whereas you know, you should just say, ‘Listen to your mother.’ And he's like, ‘Oh, right.’”

“We have been programmed to raise our children with a certain amount of subconscious toxic masculinity that we're trying to be really conscious of now,” she adds.

You don't know what you're doing when you're parenting!

Deprogramming toxic masculinity is just one example of how Milano is raising her kids differently than the way she and I were raised. For example, “both my kids know what the word ‘consent’ means already,” Milano laughs.

“I think we teach a lot of these lessons too late,” Milano adds. We expect so much of our kids once they’re in high school, like “to understand equality and respect,” she says, when “their hormones are raging.” So, she reasons, “If we can instill those things earlier, so it's just part of their daily being … at an earlier age — I'd like to think it's easier for them in high school.”

She pauses for a moment and laughs again. “I mean, I don’t know! You don't know what you're doing when you're parenting!”

(At this point I can’t help but tell her that, as the mom of a 16-year-old daughter, I think she’s definitely on the right track.)

As parents we need hope.

Later, as Milano took the stage to accept her Voice of Empowerment award from Safe Haven, she glowed with what I interpreted as a steely resolve, and I found myself thinking of her children, and my own daughter.

“As parents we need hope,” Milano told me. “It’s probably the most important aspect of parenting. Because otherwise, what are we what are we doing? What are we doing if we're not trying to make generations better?”

*Editor’s note: Per the Indian Law Resource Center, “More than 4 in 5 American Indian and Alaska Native women have experienced violence, and more than 1 in 2 have experienced sexual violence.”

Editor's note: This post has been updated to correct Milano's daughter's name.