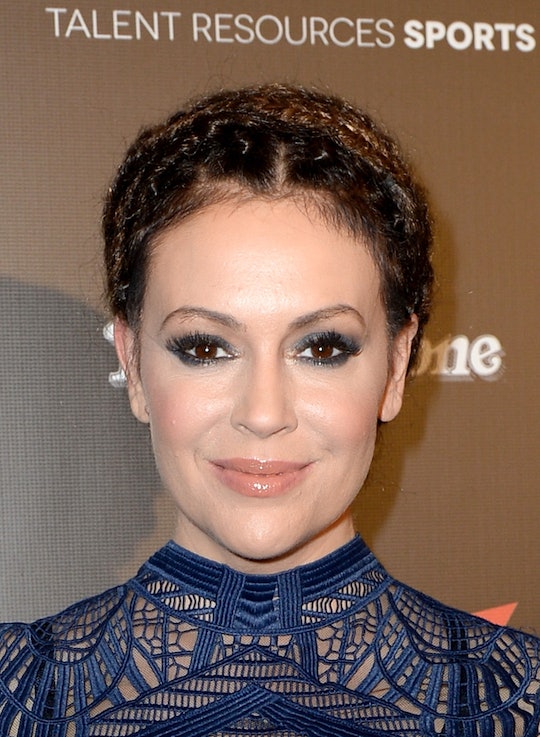 Alyssa Milano has been killing it lately. The Charmed actress and feminist wrote an essay for Marie Claire on International Women's Day about President Donald Trump, and how it could ultimately be women who "take him down." The 42-year-old mom has also been taking to social media to inspire other mothers with her real talk about breastfeeding, parenting, and body image. Her Instagram feed has become a veritable treasure trove for mom inspiration — unfortunately, Milano's postpartum body Instagram photo sort of missed the mark, however well-intentioned it may have been.

Milano posted a black and white selfie on Thursday, which featured her (admittedly amazing) abs, with the caption:

It took me two and a half years after I had Bella to get these abs back. It can be done. Just put your head down and do the work. Now here's hoping my thighs follow suit.

So here is what I love about this: I really do appreciate that Milano is giving fans a more realistic idea of how long it takes to "get these abs back" — particularly when compared to other celebrity moms (who shall remain nameless) and their super-human, immediate return to chiseled, yet somehow perpetually oil-slicked, perfection. Milano admitted she had to work for it, and kudos to her for the honesty.

Now here is what I don't love: Let's not pretend that Milano doesn't have a very different life than the rest of us. Most moms do not have personal trainers, nutritionists, or even personal chefs or the ability to purchase all-organic/healthy food delivery subscriptions — it's just not at our disposal. (Not to mention that many of us don't have nannies at our disposal.) So that whole rah, rah, sis boom bah attitude, "Just put your head down and do the work," is a bit misleading. It's not that simple. Especially when moms are breastfeeding and their bodies don't really feel like their own.

This, of course, isn't to say that Milano had a full staff of helpers to do everything for her. In fact, from the looks of it, she's a pretty badass, "I'll do it myself" mom who gets her hands dirty. But again, the fact remains that her life is likely very different from the average working mom, low-income mom, or mom of five who can barely breathe without suffering through another kid-meltdown. Fitting in a workout might be doable for Milano, but in all honesty, a regimented routine like that can be hard to implement for a lot of people.

Milano, who is the mother of 6-year-old Milo and 2-year-old Bella with husband David Bugliari, is clearly proud of herself for reaching a hard-won goal. And no one wants to take that away from her. But here is my question; is this still the goal we women are setting for ourselves? After putting our bodies through the most amazing, rigorous, difficult test of having a baby, do we really need to remain so laser-focused on reclaiming our abs or our thighs or whatever? Still?

Apparently so. When scrolling through the comments on Milano's Instagram post, they appeared to fall into two categories: new moms who were "inspired" by Milano to get off their butts and lose the baby weight, and men commenting on how "hot" Milano looked:

How often and for how long [did] you exercised [sic] each time? So busy with full time job and my almost 2 years old. Need some inspiration. Thank you!

You are inspirational!! Time for me to do it.

Wow well done! Looking good! I wish I could get rid of the c-section overhang....

While Milano may have intended the post to be inspirational, it seems to have fed into yet another stream of self-inflicted mom-guilt. A little self-flagellation for not being in better shape, for not working hard enough — in essence, for not being able to keep up with the rigorous fitness regimen of a celebrity.

Perhaps it would have been more empowering if Milano had simply posted the photo sans "fitspiration" caption, so people could revel in how much of a badass she it. Perhaps it's time to rethink priorities. Perhaps we just need to take "rock hard abs after giving birth to a whole human being" off the top 10 list of mom-goals.