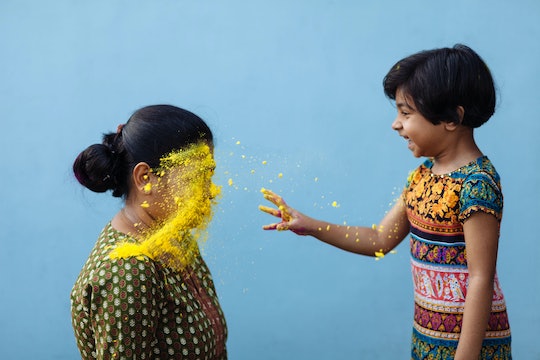 Don’t Think You’re A Fun Mom? Your Kid Might Disagree

At a recent early childhood event, 4-year-old Amelia Thompson was asked what wishes she would want to hang on “The Wishing Tree.” Her mother Erin, 34, of Bellevue, Pennsylvania, expected her daughter to name something outlandish, something deliriously impossible and magical — Amelia is known for her lively imagination. Instead, the child asked her mom to write down, “I wish for lots of playtime with Mommy and Daddy!”

The wish stopped Amelia’s mother in her tracks. She considers herself and her husband RJ to be playful parents, and since Amelia is an only child, they spend lots of one-on-one time together. Erin also has a master's degree in education and teaches extracurricular STEM classes to preschoolers. She’s led the “potions” class at a local Harry Potter-inspired festival, making giant batches of magical slime. As a mom, she’s pretty fun. So what exactly was Amelia wishing for?

As a parent, it is impossible to avoid the onslaught of messaging around how we should play with our kids. The rise in subscription activity boxes, STEM classes, and an overwhelming mountain of extracurricular options has left most parents with the idea that good parenting means structuring their kids’ time. Parents often say that they “don’t like playing with their kids,” but the reality is that many report the high expectations around what “play” involves take the fun out of the process. The spontaneous nature of play has been lost to scripted and structured time.

Experts say this perception misses the mark. Kansas City-based play therapist supervisor Tina M. Clark, LSCSW, RPT-S, has been studying and teaching the art of play for nearly two decades. Between school-based instruction, parenting classes, and individual therapy, she has devoted her career to the art of play. What is Amelia most likely asking for? Not the time of her life, via a set of ingenious stepping stones geared toward an educational breakthrough, she says. Just unstructured, child-led play time with her parents. That is all that most young children want from play.

The best thing you can do is get on their level and just play next to them.

“We sit down and want to spend time with them, but then we either feel like what they are doing is not the right thing, or they are off developmentally. It’s on us to let go of our expectations and that word ‘should'," Clark says. “We need to let go of the idea that we need to facilitate this play. When you are sitting down with your kids the best thing you can do is get on their level and just play next to them. Notice what they are doing and just comment on it. Like a camera can see, not with your judgment attached.”

Galadriel Monte is a 32-year-old mother of six kids in Snow Hill, Maryland. When asked about what they like to play with their mom, her crew piped up with sentiments that fall right in line with Clark’s advice as well. Martha, age 8, shared that she likes when they play games together. When asked to dig deeper into what she likes about playing the games, she responded: “Playing together.” Martha’s twin, Odessa, noted that her favorite activity is time with just one parent. As a child in a large family, her favorite is, “When we go shopping together just you and I.” Monte said that she and her husband try to take the kids out for one-on-one time as regularly as they can. Whether its a grocery trip or something like mini-golf, they are hearing their kids’ desire for time.

Emily Kane, who holds a master's in psychology with an infant mental health certificate, spent her term as president of the Pittsburgh Toy Lending Library helping parents curate just what the Monte children are seeking. The space, just one in a network across the country recently highlighted in The Atlantic, is geared towards encouraging unstructured play. The toy library boasts limited adult seating and no wifi. There are no licensed character toys. The goal is play.

It’s eye contact. It’s responding to emotion and communication with validation and support.

Child development advocate Fred Rogers visited the space on an episode of Mister Roger’s Neighborhood in 1986. After exploring the toys, he turned to his viewers and remarked, “One of the most important things about being a child is that you can take the time to learn to play well.” Kane notes that this continues to be a goal of the “toyeries” she has connected with. “Human brains are wired for interpersonal connection. What infants and young children need from their caregivers is high-quality attention. It’s eye contact. It’s responding to emotion and communication with validation and support.” The board’s goal for the space is to let children experiment and experience themselves freely, with their caregiver playing along. Kane hopes these ideas transfer to the home setting as well.

If you ever "pretend you’re startled when your child roars like a tiger," you've engaged in the best kind of play, according to Happiest Baby CEO and pediatrician Dr. Harvey Karp, M.D. He calls it "playing the boob," and gives an abundance of tips on how you can delight your toddler with simple games (mixing up the words of a song, pretending to be a klutz) on his website and in his book Happiest Toddler On The Block. "It's not rocket science," he told Romper previously of his techniques. But they are powerful. "Playing the boob makes kids feel like winners."

Snuggling and playing UNO are at the top of the list of things 6-year-old Hunter McPherson of Myrtle Beach, S.C., loves to do with his mom, 36-year-old Aimee McPherson. He didn’t list one expensive or elaborate activity in his list of preferences as he capped off his description of a perfect day with chalk, washing Hot Wheels cars, and playing cops-and-robbers. Some parents balk at play that demonstrates violence or bad behavior like cops-and-robbers, but we don’t need to.

Clark notes that developmentally, kids choosing to play games like Hunter’s choice of cops-and-robbers is very typical. “Play is a child’s language. They can act out being aggressive or mean, and we are so quick — especially with little girls — to tell them that they are not being nice.” Children then feel that they can’t play in front of their parents for fear of judgement. “There is a reason they are acting this out, and they will often come to a positive resolution of the pretend conflict on their own — that’s pretty cool to watch, if we let them.”

Twenty minutes every day. That is your magic number, 20 minutes to just be.

Simple games like the card game UNO are also winners in Clark’s book. “UNO, battleship, marble run — as kids get slightly older these are great games for eye contact and connection. Twenty minutes every day. That is your magic number, 20 minutes to just be. No pressure, and no task to get done. That is all they really need.”

Beyond that 20 minutes? Clark encourages boredom.

“We don’t let our kids get bored. We start barking at them about what they could find to play,” he says. It is easy for parents to go there, because we need them to find something to do, so we try to orchestrate it with endless kits, toys, and playrooms. “You would be amazed at what happens if you stop responding and just tell them, ‘You will figure it out.’”

Most of the time, they do. Clark prefers integrating small baskets of toys and activities into the main living spaces of the house, and rotating toys frequently. The concentrated “play room” brimming with toys can overwhelm kids, and actually make them less likely to play well. Kane echoes this sentiment, as she sees open-ended play items encouraging kids to go “off the script” and use their imaginations more. “Toys with corporate branding or culturally loaded messaging are largely absent from our space. Instead, huge wooden blocks become an airport runway, or a stage, or a boat.”

Both professionals love to keep toys at eye level and rotate them every so often.

The most important takeaway from these professionals (and from the kids, who are the true experts) is that mom, you are already fun enough.

Skip the Pinterest board, Tinker Crate, and wheel-thrown pottery class sometimes, and trade that all for presence and simplicity. That is all our little people really want from us at the end of the day, and those are the moments they will reflect back on in adulthood.

Romper recently caught up with Amelia, whose wish hadn’t changed. “I just want to play with my mommy,” she said.