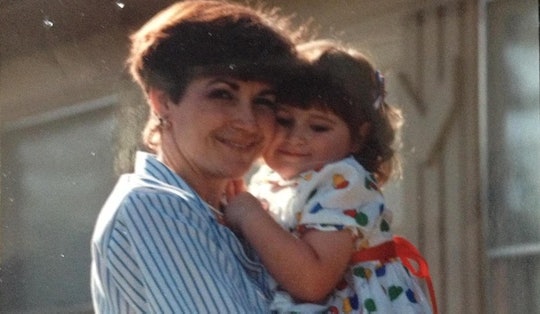 Am I Reliving My Mother’s Trauma Through My Pregnancy?

It was really late at night, and I woke up in my Little Mermaid sleeping bag on the floor of my cousin Tommy's bedroom screaming and crying for my mom. But my mom was at the hospital delivering my baby brother. I was 5, and I remember it all very clearly. Something didn’t feel right, and I needed to see if my mom was OK. I knew it wasn’t, somehow, and the thought shook me out of a sound sleep. My Aunt Kitty ran in to me, and then called the hospital to see if I could talk to my mom and dad.

I don’t remember what was said during the conversation I had with my parents that night, but I do remember them sounding really awful and weird. It wasn’t until a few days later that I found out my brother Alex was stillborn. This information is horrible enough on its own, but to make it more devastating, I was also supposed to have a twin sister, Amanda, and she had been stillborn as well, five years before.

I remember my parents taking me for a walk around our neighborhood in my little red wagon to give me the news. And I’m ashamed to admit that when they told me what happened to Alex, I didn’t react well — though maybe I did, considering I was only 5 years old. I have forgotten it, but my mom told me I yelled at her and my dad and said it was all her fault and kept asking her, "What did you do?" And then I said it couldn’t be real because we had just finished decorating Alex’s nursery and I had helped put the Muppet Baby stickers on the walls and put stuffed animals in his crib. I’m ashamed of what I said, but obviously my mom said she understood and even though that hurt her at the time, I was 5, and she knew that’s why I reacted the way I did.

Fast-forward 27 years, and my husband and I were struggling to conceive a child of our own, even though I was scared shitless about the prospect.

My immediate thoughts were panicked: What if this pregnancy doesn’t stick? Should I be cautiously optimistic so the letdown of losing the baby isn’t quite as hard? If I lose the baby, I don't want to get a divorce like my parents did.

It took me a long time to come around to even wanting a kid, but the more I thought about it, the more I realized I really did want to become a mom. Conceiving took us a while, and I started to think that maybe it wasn’t in the cards for us, a sign that maybe I shouldn't have kids. Then, in September of 2017, right before my 32nd birthday, I saw two pink lines on a pregnancy test.

I was simultaneously elated and scared to death. Maybe all women are, but I feel like my concerns may have been out of the norm. My immediate thoughts were panicked: What if this pregnancy doesn’t stick? Should I be cautiously optimistic so the letdown of losing the baby isn’t quite as hard? If I lose the baby, I don't want to get a divorce like my parents did.

I know I sound nuts, already preparing for the loss of a baby. But not only did I have the trauma from my childhood weighing in the back of my mind, I also have PCOS (which increases the chances of miscarriage in early pregnancy), and I suffered a stroke two years ago. This meant I’d have to get shots in my stomach every day of my pregnancy, and I wasn’t sure of the side effects, if any, of that, but I was terrified all the same because it was all so different for me than any other pregnant person I’d met.

I am currently 5 months pregnant, and even though I know rationally that everything is fine and that miscarriages and stillborns — especially in my mom’s two cases — aren’t hereditary, I have been having severe panic attacks. I feel my chest begin to tighten at random moments, while laying in bed or relaxing on the couch, and I suddenly can't breathe.

I'm not sure if it was due to past trauma, or just my brain misfiring, or a combination of both, but I was diagnosed with generalized anxiety disorder and social anxiety disorder in early college. I have had panic attacks in the past, and am apparently known by close friends and family to have an “anxious” personality, but I’ve never been like this.

I find myself asking my husband to Google random symptoms several times a day to see if anything points to a miscarriage. I have been completely convinced with every cramp or burning in my lower abdomen that I was losing the baby. I’d cry and Google and cry some more. I've spent months annoying my friends and husband with all of my questions: “Did this happen to you when you were pregnant?” or “Hey, honey, Google this for me please, so I can sleep tonight.”

Maybe I woke up that night sweating and in a panic because I could sense my mom's grief all the way across town and just instinctively knew it was the same feeling she had when we lost my twin sister. The concept of intergenerational trauma is basically that our parents can transmit their grief to us as children. The anthology, Lost in Transmission: Studies of Trauma Across Generations, quotes a sidewalk Santa who noticed, after 9/11, that parents would not “let the hands of their children go. The kids sense that. It’s like water seeping down, and the kids can feel it." Psychology Today reported on the book, writing that the trauma can be particular to a family, as in the death of an infant.

I do feel, however, my parents did the best they could to "shield" me, so to speak, from their grief when they found out I was trying to conceive. My poor dad seemed nervous from the start — I could tell only because we are so close. And I think with every phone call reminding me not to walk down steps or lift anything heavy (even though I'm fine), he continues to be worried about me going through the same thing as he and my mom did. I felt it in his huge sigh of relief when I told him the latest ultrasound was perfect, and he said, "Well thank god all is well... for now." I honestly don't blame him, but it certainly doesn't help with my anxiety. And dad, if you're reading this, it's OK and I understand. Truly.

I've had so many people tell me that I'm the most worried and anxious person they know, and I just need to relax, because women deliver healthy babies all the time. I know it seems from the outside that I’m just an overly worried new mom-to-be, but unless you know my circumstances, please don’t tell me I need to simply stop worrying so much, or that the baby is fine and to chill out. In fact, maybe friends, family, and co-workers shouldn't say those things to any pregnant woman. I feel like it's dismissive of our feelings, at the very least, unless they're saying it with love, and telling them to relax because everything will be OK.

You never know what someone’s been through, so maybe their anxiety over being pregnant isn’t a matter of just needing to chill out.

Being pregnant, especially for the first time, is a scary thing. Your body is going through so many changes and everything is new and weird and you’re not sure what the hell is going on in there. If you're a mom already, try to be supportive and understanding. Us first-timers often look for your wisdom and support, and while this is a magical and amazing time during our life, it’s also scary and weird and completely foreign to us. You never know what someone’s been through, so maybe their anxiety over being pregnant isn’t a matter of just needing to chill out. Listen, tell them it will be OK, and reassure them that you’re there for them if they need anything.

And for other panicky mamas: you’re not alone, and it's OK to ask for help if you choose to. I’m scheduled to see a therapist for the remainder of my pregnancy, at the request of my maternal-fetal medicine specialist and OB-GYN, to try to give me some techniques to calm the panic during pregnancy, and to hopefully prevent postpartum anxiety or depression. Mamas, I hear you and I feel you. You’re not crazy, and having a good support system around you definitely does help. You’re going to be OK, and your baby will also be OK more likely than not. This is what I'm telling myself every day, too.

After a long night last night of lying awake for hours, worried because my baby didn't move as much that day — even though I read in my What To Expect book that it's normal for baby's movements to be sporadic in the fifth month — I feel my son kicking and squirming away as I'm writing this now. And I'm finally smiling, though I'm emotionally and physically exhausted. I feel hopeful that everything will turn out just fine, and I'm glad I'm asking for help from experts to make sure I can be the best mom I can be for my son, while he's in utero and once he comes out.

More Like This
22 Valentine's Day Pregnancy Announcement Ideas Sweeter Than Candy
Guys, We Need To Talk About Pregnancy Farts
Is Raspberry Leaf Tea Safe To Drink During Pregnancy?
Is Vape Smoke Bad For Pregnancy? Experts Explain The Risks
What Parents Are Talking About — Delivered Straight To Your Inbox