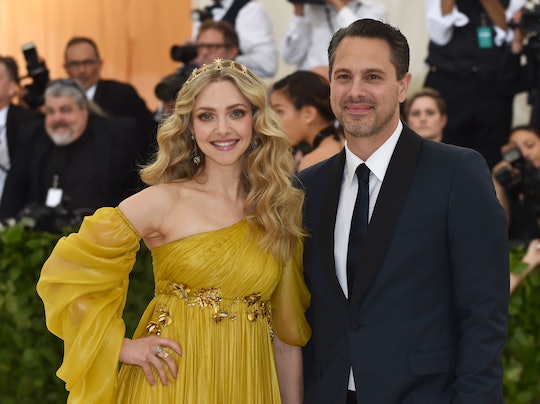 With one sweet photo of her newborn and an Instagram post raising awareness for a worthy cause, actress Amanda Seyfried confirmed she gave birth to her second child, an adorable baby boy.

The Mean Girls actress and her husband Thomas Sadoski announced the birth of their son with the help of two charities: INARA, an organization that works to help give war wounded children medical attention and War Child USA, which works to protect children from the impacts of war.

"Since the birth of our daughter three years ago, our commitment to the innocent children that are so brutally affected by conflict and war has been a driving force in our lives," the couple said in a statement. "With the birth of our son the work of INARA and War Child has become our north star."

Both Seyfried and Sadoski, who welcomed their daughter Nina in 2017, are board members for INARA and ambassadors for War Child, citing their daughter for their passion behind this cause. "I think any parent, all parents, should be able to relate to the innocent suffering of children," Sadoski told People in July. "It's just something that's deeply, inherently part of who we are — that we want to protect our little ones."

When they're not acting or helping raise awareness for causes close to their hearts, the actors live a pretty private life. You'll find more photos of Seyfried's dog, Finn, on her Instagram account than you will of her daughter, whose face she keeps concealed on social media. And you won't find any photos of her most recent pregnancy there, either.

During an August appearance on the YouTube talk series, Molner's Table, Seyfried said that she has been living in a renovated farm house in upstate New York with her family and their animals. "These days, it has been me waking up and going downstairs and drinking coffee and hanging out with my daughter and then Tommy feeding [the animals]," she said. "And you know what? Our family's still together. I definitely think my marriage is even stronger."

To help the couple celebrate their little boy's arrival, the couple suggested making a donation to INARA and War Child USA. As Sadoski wrote on Instagram, "If you’re interested in helping out the (now) 4 of us would love it if everyone able could set up a monthly $4 (or $44!!) donation to BOTH of these incredible organizations that help make the world a better place for kids."