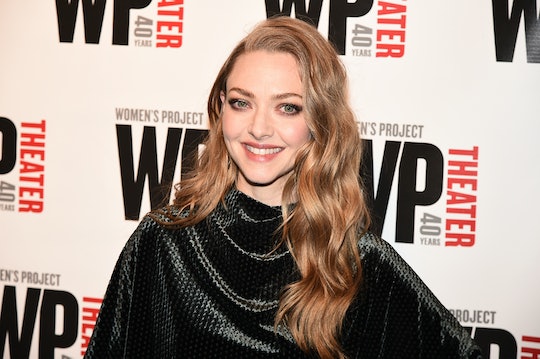 It must be really amazing to have a sister. I only have brothers and they're nice and all, but a sister... now that would be something. Especially if you are lucky enough to have a sister close enough in age to you that the two of you might be having babies fairly close together. These things happen in real life as well as the movies, apparently, and not even big celebrities are immune to the delights of having siblings around when you have a baby. For instance, Amanda Seyfried's throwback breastfeeding photo is a sweet tribute to her "favorite day," and who is it sitting right there in the photo with her? You guessed it, her sister.

The Mamma Mia actress became a mom for the first time back in March 2017, when she and her husband, fellow actor Thomas Sadoski, welcomed the couple's daughter. While Seyfried has gone to great lengths to protect her 2-year-old girl's privacy, not sharing her name and always careful not to share pictures of her daughter's face, every once in awhile she shares a little glimpse behind the scenes. On Thursday, Seyfried shared a moving photo of herself with her then-newborn daughter and her sister in an effort to remember her "favorite day." The day her baby was born.

The picture shows Seyfried breastfeeding her baby girl as she and her sister share what looks to be a deeply meaningful moment together. The picture must feel especially timely for Seyfried, as her older sister Jennifer is currently expecting a baby girl herself. The Art Of Racing In The Rain actress shared a photo of the two sisters embracing on Wednesday with the caption:

Sister’s got my niece in her belly. I hope our daughters are even tighter.

It seems as though Seyfried's new niece might have several choices for super close cousin friends in the future if she has anything to say about it. She told Entertainment Tonight in 2017 that she "definitely wants more babies" and made it clear that being a mother had already "empowered" her in some surprising ways:

I feel more empowered. Like, I’ll say no, I can’t do that press trip, because I’m spending time with my daughter. ‘Oh, you want my top off for that part? How about we scrap that sex scene altogether? And no, I’m not wearing those thongs!’

Now that Seyfried's sister is having a baby, chances are the actress might be getting the baby fever herself again. Because baby fever is an actual thing, according to Live Science, and if that baby also came from a person you love... it can be hard to resist the pull. Especially if you had a close relationship with your own sister and are hoping to foster those types of relationships for your children down the road. As Seyfried said herself, she's hoping her daughter will be even tighter with her new cousin than she is with her sister.

And if that photo of the two sisters on the day Seyfried gave birth is any indication, their bond looks pretty tight.