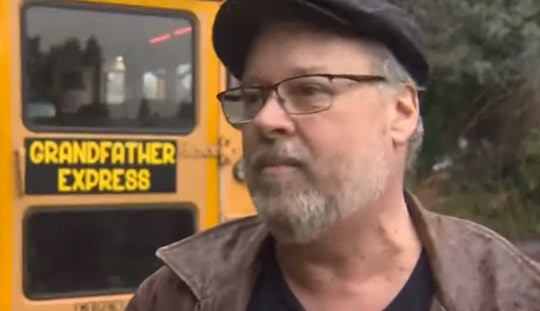 Sometimes it can be tough for grandparents to find exactly the right gift for their precious grandchildren. Tough for some people, I mean, but not for Doug Hayes. This thoughtful and creative grandpa bought a school bus to drive his grandchildren to school and, yep, they loved it.

Hayes, from Gladstone, Oregon, is all about his grandchildren; he has 10 "so far," as he told CNN, and he makes no secret about the fact that he loves to hang out with them. So much so, in fact, that he gifted them with their very own school bus on the Friday before Christmas. He will of course be the driver since the bus is officially called "The Grandfather Express."

According to CNN, five out of his 10 grandchildren attend the same school, Paideia Classical Christian School, which does not provide a bus service. So, instead kids are dropped off by the parents in a line of cars. "The kids have always said, 'Gee whiz, I like our school, but we would like to be able to have a school bus,'" Hayes told CNN.

So they got exactly what they wanted, but perhaps even slightly better. Their very own Grandfather Express.

All of the kids who will be attending school live within a 20-minute drive and Hayes is located just a few minutes away, according to Fox 8, which means he can drive the kids to school, drop the bus off, and then head to work himself. That's right: Hayes isn't even retired and he's still willing to get up early in the morning and drive his grandchildren to school. Not just willing, actually; he's eager to spend the time with the little ones. As he explained in an interview with KGW News, "Here's an opportunity where I can give them a memory that will last all their life."

Hayes also plans to use the Grandfather Express, which he had equipped with seat belts, to take the kids on trips to places like the zoo. As for the kids' reaction, Hayes' grandson said he was "stunned," while one of his granddaughters told KGW News that she couldn't wait for the ride to school in January when she was sure her friends would be like, "Wow, you get to ride a bus? No one else does!"

This is the gift that keeps on giving. And while they are not pictured, I imagine the parents of these children heaving a sigh of relief knowing they get a little extra time in the morning. Well played, Grandfather Express.