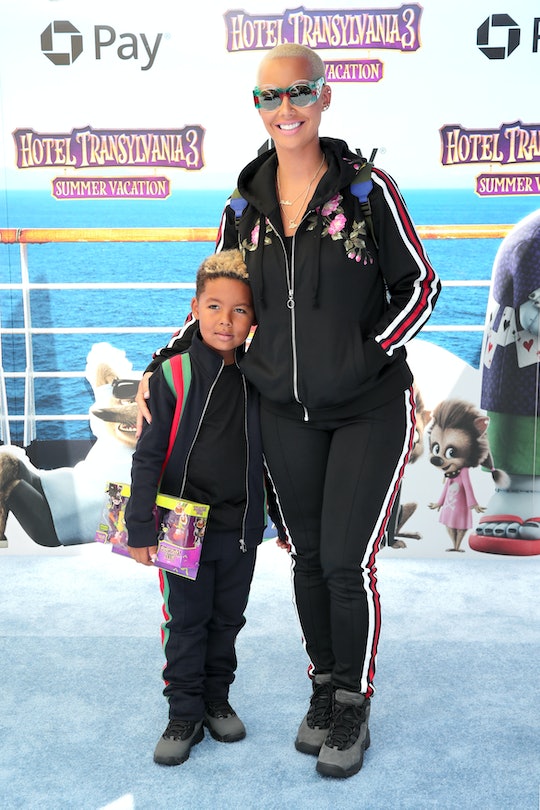 I totally get the concept of wanting to be the cool parent. I've never been one, to be clear, but I've certainly tried. Unfortunately my version of super cool parenting has always been about baking cookies and trying to bond over TV. It never works. But, maybe if I encouraged swearing I would have been better off. In a recent interview with Us Weekly, Amber Rose said she lets her son curse because she sees it as a "form of expression," but the internet is not totally on board with her reasoning.

The Slutwalk activist is mom to 5-year-old son Sebastian, whom she shares with ex-husband, rapper Wiz Khlaifa. As with most moms, she has her own way of parenting, which makes sense. I mean, we all have to make decisions about how we want our kids to be raised, right? Mom-shaming is super old news at this point, and no one wants to be called out as someone who is judging another mom's choices for her own kid. Even when that choice might be slightly unconventional. For instance, encouraging your 5-year-old son to say f**k, which I'm not even allowed to type as a grown up lady.

As Rose explained to Us Weekly, "I let my son curse in the house because it’s a form of expression. Kids like to curse. I tell him when it’s appropriate and not to say it at school. That’s it.”

Rose clarified by saying she tells her son it's appropriate to swear if he hurts himself, as Page Six reported, and she might be winning me over a little. It is incredibly satisfying to cuss when you stub your toe or something. And while she's fine with the kindergartner using the f-word, she discourages him from using the n-word.

As for how other parents reacted, there are were some out there who felt it was perfectly fine for Rose to allow her 5-year-old to swear. Or at the very least, figured it simply wasn't their business.

However, the majority of the internet seemed to light up with pearl-clutching indignation all around.

While some parents might not love the fact that Rose is allowing Sebastian to say curse words, I think most parents would support her choice to teach her son about consent early on. Rose told the Us Weekly in a separate interview in September that her son is a really affectionate kid who likes to kiss everyone hello, but when he wants to kiss girls he has to ask for their permission:

I'm like, "Honey, I know we kiss you all the time and stuff like that, but you have to ask permission and they have to say yes, and if they say no, you can’t kiss them, baby. I'm already teaching him consent at 5 years old!"

She also plans on teaching her son about taking initiative when it comes to safe sex. As the activist explained to BET, her plan is to make sure he has access to condoms in the home when he's old enough to consider having sex.

For what it's worth, I think teaching her son about consent at such a young age is integral. And sure, maybe I didn't let my kids swear when they were little but trust me... that didn't stop them.

It just meant I was able to get a latte with all the change in the swear jar. Sort of a win-win.