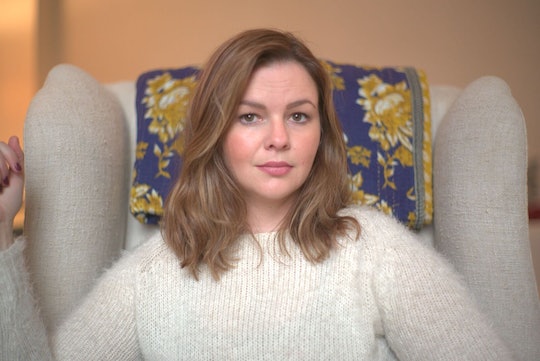 The equal and opposite action for being a child star is disappearing from public life and learning a medieval trade. Gaby Hoffman moved to a trailer in the Catskills and learned how to make stone walls. Emma Watson’s rebellious period saw her attend Brown to study English literature (ye). Jena Malone tore the lining out of her campervan, moved to the woods, and now enjoys making Cob homes in her spare time. For Amber Tamblyn, the precocious child actor and poet known for being able to cry on cue, there was a period of dark purposelessness after the Sisterhood Of The Traveling Pants movies — a phase in which she wondered just what she would create.

Her chosen vocation? Alongside directing and writing, setting off an almighty bonfire as an activist (in keeping with the theme, not a trade rich in remuneration).

Tamblyn was radicalized by motherhood, she explains in Era Of Ignition: Coming Of Age In A Time Of Rage And Revolution, the memoir she released this past March. Like myself, Tamblyn was pregnant the night of the 2016 election — a historical bummer of a time to feel those kicks. Present at the Javitts Center for the Hillary Clinton 2020 watch party, Tamblyn realized partway into the night that the election would break for Donald Trump, that Hillary wasn't going to show, that all the white pantsuits in the world couldn't save her from the same old misogyny (even her husband, David Cross, was a Bernie bro). On the way home, she thought she was going into labor, but in fact she was experiencing her first panic attack ("Oh sh*t. It's going DOWN!" said a homeless man as she sank down in a stairwell struggling to breathe).

"I was seeing how women were being treated out in the world and, internally, literally and metaphorically, I was carrying a girl that would possibly, potentially become one of those women one day," Tamblyn explains to Romper of the laden state of pregnancy at the time (again, really a bummer).

"So, I was really seeing the connection for the first time of not just being angry at the outside world, the way women were treated ... not just angry at the way I'd been treated, but knowing that my daughter could also go through those things."

I meet Tamblyn in the nut-brown bowels of a Marriott; we sit in two armchairs facing a conference table that says “what is our go-to-market strategy?” A briefcase lined with pens in satin holsters sits open-mouthed on a high-top next to the coffee station. We are in work clothes, she in a plaid blazer, both of us looking like people who might be ignored in a meeting, only to have Andrew from sales pipe up five minutes later the very idea we suggested ("... what if we called it Era Of Ignition?") and be met with applause. Today, though, people are listening. Tamblyn is in Austin, Texas, to speak as keynote at the Mom 2.0 Summit, and it is impossible not to draw a line from her onstage conversation in the morning to the afternoon speech given by Brené Brown, the best-selling author and “shame researcher” who has created what I will term the "megachurch of vulnerability."

"You want to be heard. I want to be heard. And that's one of the biggest problems that we have right now, is that we're not really engaging in difficult, complex, often uncomfortable conversations and dialogues," she tells me of our tendency to speak in monologues.

Internally, literally and metaphorically, I was carrying a girl that would possibly, potentially become one of those women one day.

Tamblyn talks in her memoir about feeling powerless (she had a hard time securing distribution for her critically lauded film Paint It Black). Eventually, she realized her name and her access to powerful people were tools she could choose to use to help others.

Her father is Russ Tamblyn, seen in Twin Peaks but most memorable in my mind as the plié-ing gangster Riff in West Side Story. Russ was establishment Hollywood but his work had largely dried up by the late ‘80s, and Tamblyn’s remembrances of childhood in her book are of gypsies and penniless poets blowing through her Santa Monica house — artists because they are helpless to be anything otherwise — rather than of industry heavyweights reveling in their fame. (We do hear about Ted and Mary more than once.)

Tamblyn discusses having difficult conversations with her father, a well-meaning chap who was in the cheer section for her weight loss as a teen ("tone the arms" is Hollywood-speak for drop the pounds), and with her husband, Arrested Development cast member David Cross, who is 20 years her senior and sometimes needs to be educated on why whatever it is he has said or done is problematic.

"Who wants to write about the difficulties with their marriage and with a lot of the things I shared in there?" Tamblyn asks me of really getting into it in the book. "I wanted to feel less alone, and I wanted readers and women who were struggling with this conversation and minority voices who were struggling with the conversation to also feel less alone."

Women are "so foundationally rooted in their instincts and it's hard to express to someone when you know something is so deeply wrong and to put it into language that is believable."

"We could have a whole side conversation about women's believability and how that is sort of othered from our experience," she adds.

Ever-on, difficult conversations have been one of the things Tamblyn has found she is quite good at. She is widely known as the person who got Quentin Tarantino to publicly speak out against Harvey Weinstein, after goading him for hours over some tumblers of whisky. "I got a lot of flack for that," Tamblyn says.

How can I get somebody to see what they're not seeing?

She was in touch with Ronan Farrow and Jodi Kantor before Kantor broke the story of Weinstein's crimes in the New York Times. “Sit tight,” Kantor texted her the night before publication. “These women are going to need support for telling their stories. You will know exactly what to do.”

Tamblyn has taken that mission to heart.

After #MeToo lit up Twitter (two decades on from its inception in Tarana Burke, Tamblyn notes), she joined with America Ferreira, Alyssa Milano, Jessica Chastain, and others in a gated community in Los Angeles to hash out a mission for what became the Time's Up movement. In the time since, she's been happy to use her life as kindling: She has written about the time James Woods allegedly tried to pick her up and whisk her off to Las Vegas, at 16 years of age, and about the time an ex-boyfriend removed her from a nightclub by grabbing her around the neck and between the legs, cussing "She's mine."

She has written three books of poetry, as well as a novel, Any Man, and her best poems are little machines of destabilization, each line impossibly balanced on the one that comes after, like this moment from "Epilogue":

I’ll bet their wives let their cats go out

She asks herself each day, "How can I get somebody to see what they're not seeing? Just in the way that I've had friends help me see things that I'm not seeing, that sometimes I'm resistant to."

Her memoir features conversations with and essays by other women who can benefit from her platform, and she admits that as a white lady there are blindspots in her feminism: throughout, she is operating from a place of vulnerability — though of course Brown would call it ~courage~.

She genuinely believes in the concept of a sisterhood. We need to check in with the women in our lives, she says, "like, Are you okay? Do you need a glass of wine? I am here to talk. Do you need copious amounts of bourbon? I am here for you."

You really want to have a bourbon with her.

I am happy to report that Tamblyn dabbles in astrology: her memoir is premised on the concept of Saturn Return, an astrological reckoning. It takes Saturn 29 years to circle the sun, making the effects of Mercury in Retrograde seem puny: "Saturn is considered the planet most entrenched in wisdom because its long, slow orbit means more quality time spent in each house of the zodiac, richly absorbing its surroundings," she explains in Era Of Ignition.

Whatever Tamblyn, or you, or anyone else, went through in childhood, it is coming full circle now, in America's moment of existential upheaval, she says. Hence the flames.

And our children are the missing link. During pregnancy, Tamblyn suffered De Quervain's tendinosis, inflammation of the tendons in her thumb. Her doctors promised that giving birth would remedy the condition, but it persisted after her c-section. The pain and the wrist braces she had to wear made it difficult to nurse her baby Marlow, born in early 2017, causing a small catastrophe of mom-guilt.

Self care's a privilege. It's not something that all of us get to do.

Inflammation remained within her body for more than a year afterward, she says in the book, and she tried CBD oil, arnica creams, cupping, Rolfing, Chinese gua sha, and eventually an anti-inflammatory diet to treat it.

Having received so few answers from the medical establishment, she is wary of the prescription to invest in self-care.

"Self care's a privilege. It's not something that all of us get to do. Not everyone can afford certain forms of health care and therapy and things like that," she says (not coincidentally, she launched a collaboration with Olay on a self-care initiative last week).

Beyond cures, Tamblyn wonders about the root cause of the slippery auto-immune disorders disproportionately experienced by women, and mulls aloud whether there is a link to her work as that young method actor capable of crying on cue.

"I have often wondered about the side effects and damage caused to the central nervous system by forcibly emoting for a living, especially during an age when the body is still growing," she wrote in her memoir.

"So many of the physical ailments I began to feel in my early thirties seemed like scarring from my own central nervous system's misuse as a child actor."

Her fellow actors had never discussed those experiences until the conversations about #MeToo began to occur in private spaces across Los Angeles post-Weinstein, revealing all manner of trauma, great and small. It is little surprise that her co-stars from The Sisterhood Of The Traveling Pants (2005), who each performed that emotional labor (what else should I call it?), have remained tight friends into parenthood. Over a decade on from the first Pants film, Blake Lively has two small children and is expecting a third ("Congrats to my sis Blakey!" Tamblyn wrote on an Instagram story after the May announcement, the hashtag "#Amber's" scrawled on her friend's belly), Alexis Bledel announced that she had a 6-month-old in May 2016, and America Ferrera welcomed a son, Sebastian, in 2018.

"I love her son so much," says Tamblyn of Ferrera. "He actually gets all Marlow — my daughter's — passed-down clothes."

In her wider sisterhood ("We've been through a lot together, I mean, as much as blood sisters have been through together," she says of Ferrera), Tamblyn sees the opportunity for healing.

And in their children, she sees progress.

"I don't even feel like my son's gendered yet," Ferrera told her recently. "I was like, 'I feel the exact same way.' Marlow's 2 and I'm like, 'You are so fluid. You embody everything,'" Tamblyn says. "Like some days she's a boy, some days she's a girl. She's just like a wild energy and I don't want to contain it."

Saturn is back, baby.