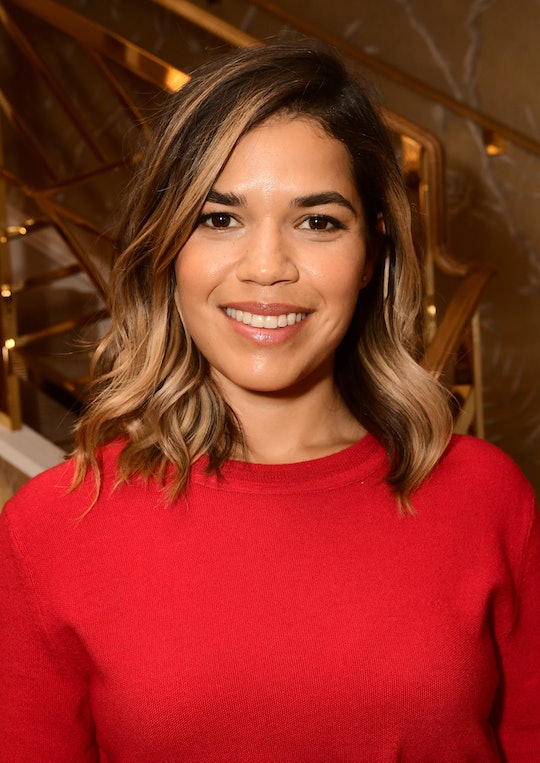 New mom America Ferrera is certainly no stranger to seriously intense workouts. She was actually in training for her third triathlon when she found out she was pregnant with her 1-month-old son, Sebastien, according to Us Weekly. But on Sunday, as she shared on Instagram, she learned that getting active again after baby is still no easy feat. In a series of images on her Instagram Story, America Ferrera documented her first postpartum workout and in addition to being incredibly validating for all other women who struggled with exercise after becoming mothers, her post is a reminder that all postpartum bodies are worthy of a ton of respect.

After putting aside her triathlon training, Ferrera — who gave birth to her first child this past May — told Us Weekly that she opted to swap it out for some light hiking and prenatal yoga instead. That seems to have worked out pretty well, because when it came to getting back into exercise, Ferrera chose to do a hot yoga class — strenuous for sure, but hopefully not too far out of her pregnancy exercise wheelhouse. The actress shared a photo of herself prior to the class, and admitted that she was "excited and somewhat terrified" for her first foray back into fitness. And while that, in itself, is helpful to see (it took me over a year to get to my first postpartum fitness class, I was so afraid), her "after" photos are what really make an impact.

In the pics that followed, a sweaty, post-yoga Ferrera listed off a few of the important things she tried to keep in mind while getting her new-mom butt kicked by exercise. Her conclusion? Making it through all came down to "humility, patience, and a sh*t ton of gratitude for [her] amazing body that just created life."

That's some seriously solid advice for women, particularly given that so much pressure is placed on new moms to "get their bodies back" as soon as possible after giving birth. Not only is that incredibly difficult to do, of course, but it also completely ignores the fact that pregnancy and childbirth change you in all kinds of ways, both physically and emotionally. Surviving a workout a month after having a baby can easily become overwhelming if you feel like you're supposed to just pick up right where you left off, and that's exactly why things like humility and patience — even if you are someone who has previously smashed two triathalons — matters so much.

For one, moms deserve to be reminded that the process of growing and then actually delivering a child is a big deal, and that it takes time to recover. And as Saint Louis University Obstetrics, Gynecology, and Women's Health professor and chairman emeritus Dr. Raul Artal explained to SELF in 2016, that can mean altering your expectations. According to SELF, Artal said:

You have to look at labor and delivery as a marathon. If you ran a marathon, you’re not going to go running the next day. They don’t call it ‘labor’ for nothing.

In general, exercise can offer plenty of benefits to postpartum women, according to the American College of Obstetricians and Gynecologists (ACOG), including, physical strength and stamina, increased energy, and a lowered risk of developing postpartum depression. And if you had a healthy pregnancy and an uncomplicated vaginal delivery, it's even possible to get back into exercise right away if that feels like something you want to do. But there's also no need to push yourself beyond what you feel ready for: ACOG, for one, recommends simply starting out with walking, and notes that "even 10 minutes of exercise" can be beneficial.

In other words? The point is that physical activity should be something that helps improve a mom's quality of life. But as Fererra so perfectly highlighted in her Instagram Story, that definitely isn't going to happen if you're criticizing yourself for not being able to do more — especially since your body just did something seriously amazing by creating and giving birth to an actual human being.

Luckily for Ferrera, she's already had plenty of practice learning to accept and respect her body prior to attempting her postpartum yoga class: in April, the actress told Shape that her triathalon training helped her "[gain] a huge amount of gratitude" for her health and her body, and added:

That lesson is one that already seems to be serving Ferrera well as she's reintroducing exercise back into her life, and it will no doubt continue serving her as she ups the ante: the actress told Shape prior to giving birth that she still expects to continue training for triathalons in the future. But you definitely don't have to be a hardcore athlete to benefit from her message.

Whether you have serious fitness goals you're hoping to achieve, or if you just want to push yourself every now and then, Ferrera's self-love strategy still totally applies. And no matter how much time has passed since you gave birth, it's never too late to offer up a little gratitude to your baby's first-ever home.