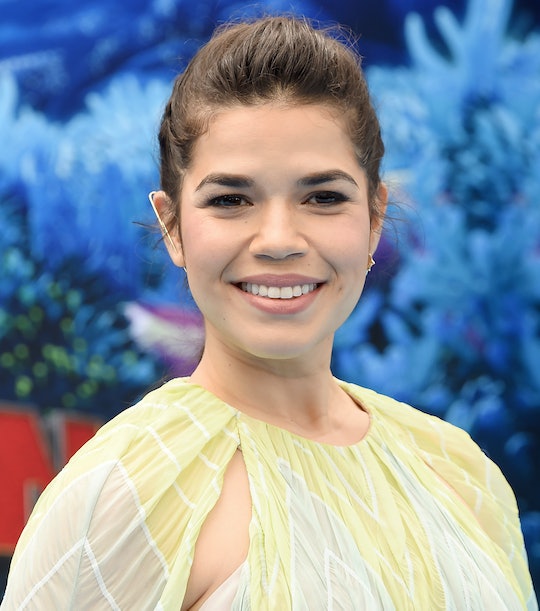 America Ferrara gave birth less than a year ago and she's already proving she's a mom you really don't want to mess with. The Superstore star welcomed her son Sebastian last June, and she's been carving her own path as a mom since day one. Case in point: public breastfeeding. While it's been a bit of a struggle for some moms out there to find their own voice and stand up for their right to feed their baby in public, this has not been the case for this actress. In fact, during a recent interview on Busy Tonight America Ferrera talked about public breastfeeding at the Metropolitan Museum of Art in New York and she's not afraid to take anyone to task if they don't support breastfeeding moms.

More Like This
Are You Breastfeeding & Also *Starving* At Night?
Um, "Rusty Pipe Syndrome" Is A Thing, & Every Breastfeeding Mom Should Know About It
Meghan Markle Reportedly Doesn't Want "A Big Baby Shower" As Her Due Date Nears
Amy Schumer Shared An Emotional & Sweet Post On Gene’s 2nd Birthday

When the Ugly Betty actress and her husband, actor/director Ryan Piers Williams, welcomed their baby boy Sebastian Piers last June, fans who know anything about this strong-minded political activist probably knew she wouldn't be putting up with any nonsense as a mother. And they were most definitely right. Especially when it comes to her right to breastfeed in public.

As Ferrera told host Busy Philipps, she was going a little stir crazy in her apartment in New York about six weeks after giving birth and decided to take her baby out for a little field trip to the Met "to introduce him to Van Gogh or whatever the hell,"

"... We get there and I'm like, 'Surely the Met will have a pumping room for mothers. It's so civilized. And there was nowhere. Not even like a bench for me to like, not even pump but like feed my 6-week-old baby." Romper's request for comment from the Met regarding Ferrera's comments was not immediately returned.

Ferrera decided to head to the cafeteria to breastfeed, but found herself met with a bunch of "looks" from strangers... which is when she realized: "Oh, people think new moms and breastfeeding moms and babies shouldn't be in public."

Instead of letting herself get deterred, she told Philipps that she just "whipped them out wherever she wanted to" because that's how babies eat sometimes. And this is why I love her.

This isn't the first time the actress has advocated for a woman's right to breastfeed in public. Last August she shared a picture of herself on Instagram feeding her baby Sebastian (with his face covered since she wants to protect his privacy) in honor of World Breastfeeding Week, as Glamour reported. She captioned the photo:

We need moms in this world like America Ferrera. Moms who remind us that it is absolutely OK to breastfeed whenever our babies our hungry. Moms who aren't afraid to push for proper facilities for moms. Moms who are simply unwilling to accept things the way they've always been.

We might need a million more of her, actually.