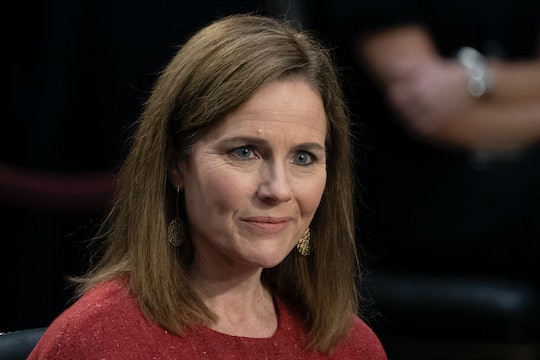 Supreme Court nominee Amy Coney Barrett's second day of confirmation hearings has renewed concerns regarding the judge's association with an anti-choice organization going back 14 years. This has some worried not only about the future of Roe v. Wade, but that Coney Barrett's vague stance on in vitro fertilization (IVF), which the group also opposes, may be challenged in the future.

In 2006, as The National Review reported earlier this month, the judge signed her name to an open-letter advertisement, issued by St. Joseph County Right to Life that read, "We, the following citizens of Michigan, oppose abortion on demand and defend the right to life from fertilization to natural death. Please continue to pray to end abortion." The organization also holds an extreme but not isolated stance that IVF should be outlawed, believing that discarding embryos in the process of IVF is equal to an abortion.

Jackie Appleman, executive director of St. Joseph County Right to Life said in an interview with The Guardian that the organization's objection to IVF stems from its belief that life begins at fertilization. "Whether embryos are implanted in the woman and then selectively reduced or it’s done in a petri dish and then discarded, you’re still ending a new human life at that point and we do oppose that," she told the publication. "We would be supportive of criminalizing the discarding of frozen embryos or selective reduction through the IVF process.”

On Tuesday, Sen. Patrick Leahy, a Democrat from Vermont, confronted Coney Barrett on her association with St. Joseph Right to Life. "The organization that led the effort believes that IVF is equivalent to manslaughter and should be prosecuted," he said. "Do you agree with them that IVF is tantamount to manslaughter?"

"I signed it on the way out of church," Coney Barrett explained. "It was consistent with the views of my church, and it simply said we support the right to life from conception to natural death. It took no position on IVF." When pressed again, she did not further clarify her personal stance. "I've never expressed a view on it," she added. "I can't take policy positions or express my personal views before the committee because my personal views don't have anything to do with how I would decide cases and I don't want anybody to be unclear about that."

Also on Tuesday, Sen. Richard Blumenthal, a Democrat from Connecticut, asked Coney Barrett if criminalizing IVF would be constitutional, as St. Joseph County Right to Life said it supports, she said she "can't answer questions in the abstract." Blumenthal called her response "somewhat chilling."

Coney Barrett's equivocation is not sufficient for many concerned for the the ongoing legality of IVF, including Sen. Tammy Duckworth, whose two daughters were conceived through IVF. Duckworth penned a personal op-ed for the Philadelphia Inquirer, in which she recalled the loving support she received from her colleagues, Democrat and Republican, when her second daughter Maile Pearl became the first infant allowed on the floor during a Senate vote.

"But I will also always remember how I felt last week — the deep knot of dread, sadness and anguish in the pit of my stomach — when I learned that President Trump’s Supreme Court nominee likely doesn’t believe my Maile or her older sister Abigail should have ever been born in the first place," Duckworth wrote in her op-ed.

Approximately 1.7% of all infants born in the U.S. are conceived by assisted reproductive technologies, included IVF, according to the U.S. Centers for Disease Control and Prevention.

Duckworth urged her colleagues to "fully consider" their votes. "With every ounce of love I have for my daughters," she wrote in her op-ed. "I’m going to urge my colleagues to fully consider the message their support of an ideologue who appears to believe my girls shouldn’t even exist sends not only to me, but to parents-to-be around this country struggling with infertility and whose dreams may only be achieved through IVF or other similar technologies."

It is common for judicial nominees to dance around getting overly specific on personal or judicial opinions on the grounds that they do not wish to speculate or give potential future litigants the impression of bias. Coney Barrett was no exception. However, her past association with St. Joseph County Right to Life leaves many questions about how, if confirmed, Supreme Justice Coney Barrett might rule on a case involving IVF.

More Like This
Jacinda Ardern No Longer Has “Enough In The Tank” & Moms Know Exactly What She Means
Teacher Shot By 6-Year-Old Student Told School He Had A Gun, Was Told To "Wait"
Florida Teachers With “Unvetted” Classroom Books Could Face Felony Charges
The President Of Ireland Wants To Get Rid Of Homework & Honestly, He's Onto Something
What Parents Are Talking About — Delivered Straight To Your Inbox