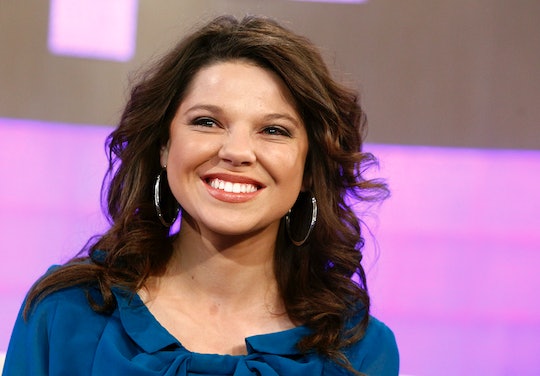 Amy Duggar has only been a mom for a few weeks, but she's no parenting n00b. As a cousin to the famously large Duggar family from TLC's Counting On, she's been exposed to babies most of her life. So when Amy Duggar shared a new photo of her baby boy and some fans questioned his safety, well, I think there was a little lack of credit where credit was due.

Amy Duggar King and her husband Dillon King welcomed their first child, son Daxton Ryan King, on Oct. 11, via C-section. Since Daxton's arrival, the Counting On star has been sharing updates about her new life with her little boy with her followers on social media. Perhaps unsurprisingly, not all of her 400,000 plus followers on Instagram have positive things to say. Which is such a shame, considering what a tender and emotional time the postpartum period can be for a new mom. Amy's most recent photo of Daxton is a sweet shot of him in sleeping in his crib with the caption, "You're my favorite reason to lose sleep...Nursery pictures coming soon!"

The issue? Apparently some people are worried about Daxton sleeping in a crib that is too roomy.

In the photo Daxton is sleeping soundly, swaddled in a black and white blanket and wearing a (cute!) gray cap and big lettered pillows that spell out his name lined up behind him in the background. Duggar might be losing sleep, but by the looks of things her newborn son is sleeping like... well... you know how it goes.

But apparently there is simply no celebrity baby photo innocuous enough to avoid criticism, because one social media commented on the photo, "Why not a small bassonnette?" This naturally opened up the floodgates, with one social media user responding "Thank you!" and several others sharing their opinions about whether or not a bassinet in the parents' room is the safest way to avoid sudden infant death syndrome (SIDS).

Fortunately, Amy Duggar was all over this issue and shut it down in short order. She replied to the original poster:

He has one... it was just for the photo. Let's just enjoy this picture... shall we?

The 3130 clothing boutique owner is all about keeping it honest as a new mom, which is probably why so many people follow her Instagram posts. She recently shared a fantastic breastfeeding post with Daxton that will look achingly familiar to any new mom trying to catch some sleep whenever, and however, she can.

Amy captioned the photo of herself snuggled under a blanket napping while Daxton feeds and she holds a cup of tea in her hand:

Pretty poses, makeup and photoshoots are great but it's not real. Life isn't perfect and I don't want the people who follow me to think that! So this is the real me, in real time living my best life! Hot tea in hand, ice water leaned up against me, half dressed and completely worn out!

It can't be easy sharing such personal stuff on social media with hundreds of thousands of strangers, all primed to judge your every move and provide a litany of unsolicited opinions and advice. It must be especially difficult after you've just had a baby and you're emotional and tired and maybe feeling a bit tender in general.

So perhaps people can give Amy Duggar a break. Actually, let's just give all moms a break. Now. Please.