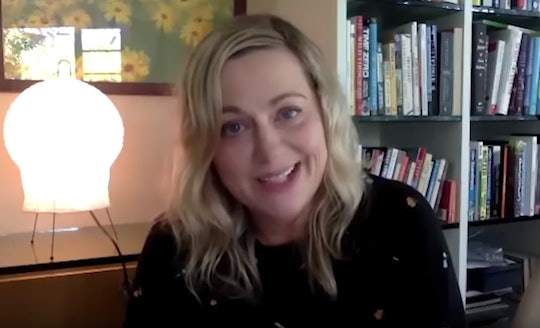 While you and I probably remember the adventures of Leslie Knope, Ron Swanson, and Li'l Sebastian very, very well, the star of Parks and Recreation, Amy Poehler, is apparently having a little trouble remembering the plot lines for each episode as she rewatches the hilarious series with her kids.

Poehler starred on Parks and Rec from 2009 to 2015 as Leslie Knope, an eager mid-level bureaucrat working in the Parks and Recreation department of Pawnee, Indiana trying to make the world a better place one playscape at a time. The show also starred Nick Offerman, Rashida Jones, Aubrey Plaza, Aziz Ansari, and Chris Pratt. It remains a massively popular show to this day, maybe because of its particular blend of good-natured humor and a little silliness.

During a recent appearance on Late Night with Seth Meyers from her home, Poehler explained that she and her sons, Archie and Abel, have been watching the show as they've been spending more time at home. Poehler told her former Saturday Night Live cast mate that she has been having a great time watching her old show with her sons because it's such a lovely program particularly right now.

"That is pretty cool," she told Seth Meyers. "It's really sweet. I've been texting the cast to show them videos of the boys watching the show, which is awesome. And I don't just say this because I'm on it, it is such a good show to watch right now because it makes you feel good and it's about a bunch of people working together to solve problems."

"My kids are always like, 'Mom, what happens?' And I'm like, 'I don't know. I don't remember.' I don't remember any of it. It's one long blur," she told Meyers. "I mean, I remember shooting the scenes and how I felt when I was shooting the scenes, but the actual story of episode to episode, I couldn't even tell you. So, it's pretty fun watching it." Perhaps especially this 2012 episode where Leslie Knope met Vice President Joe Biden?

Now if they're eating waffles while watching Parks and Rec? That would be amazing.

Editor's Note: This article has been updated with the correct air date of Joe Biden's cameo on Parks and Recreation.