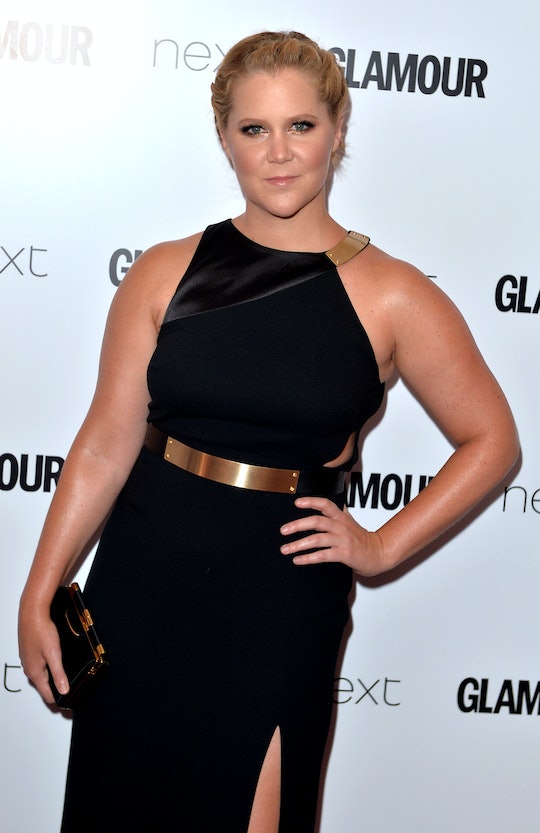 Any mom knows that pregnancy can feel long, especially when there is a huge reward waiting at the end of it all. The nine months can definitely feel like the longest nine months of your life — and comedian actress extraordinaire Amy Schumer is definitely feeling the effects of this. Everyone is now aware that Schumer is ready for her pregnancy to be over, thanks to her latest (hilarious) Instagram post.

If anyone has felt like Schumer's pregnancy has gone on forever, rest assured that she feels the exact same way. Especially since she's the one who is pregnant and dealing with every little pregnancy symptom. So, it makes sense that Schumer is pretty much ready for her pregnancy to be done. At least, this is what she told her Instagram followers on Friday night.

In the post, Schumer can be seen sitting in a doctor's office, wearing a bright yellow shirt with the words "I Hate Mondays" on it, with her bump in full view. In the background, an image of Schumer's baby can be seen on the screen, while her husband, Chris Fischer, stares at his phone. Schumer, quite frankly, looks fed up — and according to her caption on Instagram, she is fed up.

"Oh yeah does it feel to everyone like I've been pregnant for a long time? It must be getting annoying to you all that I'm still pregnant," she wrote. "Well imagine how I feel mother f—ers!!!!!!"

While her post might seem a little harsh, she has a point. She is probably a little annoyed by all of the people commenting how she has been pregnant for "years" — which of course, comes with having a high profile pregnancy. But she really can't help the fact that she hasn't arrived at her due date and her baby isn't done "cooking" quite yet. Her due date isn't super clear — Schumer has compared her pregnancy timeline to Meghan Markle's, according to Cosmopolitan, but it has not been confirmed if Markle has given birth.

There's another reason why this pregnancy must feel super long for Schumer — it hasn't exactly been the easiest for her. Early on in her pregnancy, she announced that she was suffering from hyperemesis gravidarum, or severe morning sickness, according to TODAY — and Schumer has experienced this morning sickness (well, all day sickness for her) well into her third trimester, according to Scary Mommy.

Needless to say, she is probably ready for her pregnancy to be over, just so she can put an end to all of the vomiting (and other not fun side effects, too).

During an appearance on Late Night with Seth Meyers in March, she opened up about how frustrating this pregnancy has been for her. "It's ben pretty tough, I didn't know pregnancies were such a bummer," she said, according to The Hollywood Reporter.

Hopefully Schumer isn't too bummed. It is likely that she is just days away from giving birth to her first child, and that is a lot to look forward to. It means she'll no longer be vomiting all the time or dealing with her pregnant belly. Rest assured that she is just as ready to meet her new addition as her fans are.