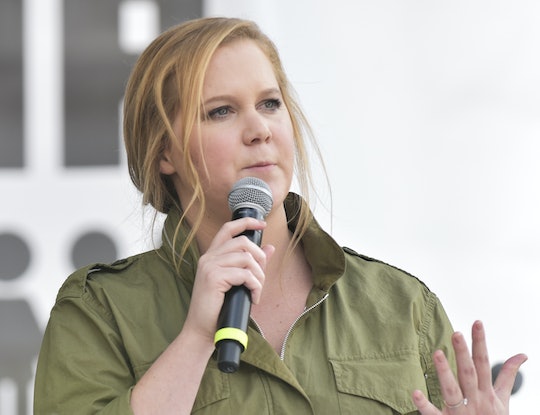 Consistency is key if you want to help change the world. Take Amy Schumer bringing baby Gene to his second protest recently, for instance. He might be just 1-year-old, but he already has two protests under his belt. Sure, the first one might have been while he was still in utero but still — it counts.

According to Martha's Vineyard Times, Schumer has been joining protesters every day at 10:30 a.m. to honor Black lives lost as a result of police brutality, including George Floyd, who died in Minneapolis on May 25 after a police officer knelt on his neck for more than eight minutes. Schumer reportedly joined local resident Dana Nunes, who initially started the protests, and as the two women have met every day, more and more people have joined.

On her Instagram Story on Thursday, the actress and comedian shared a photo of a recent protest, presumably on Martha's Vineyard, where she, her husband Chris Fischer, and Gene have been staying. In the background of the photo, you can see Fischer wearing a face mask and holding their little boy Gene as he watches the protest from across the street with a pacifier in his mouth.

"Gene's 2nd protest," Schumer wrote over the photo. "The first time he was inside me and we got arrested."

The first protest Gene attended was in 2018, when Schumer joined hundreds of people at a U.S. Senate building who were there to protest Justice Brett Kavanaugh's appointment to the Supreme Court in 2018. At the time, Schumer was pregnant with Gene. Schumer was among 300 people who were arrested while protesting, according to USA Today.

Schumer has not given up her desire for activism since becoming a mom. As she shared in a recent Instagram post about her daily protests on Martha's Vineyard, "Today thinking about how I don’t have to be worried about my son being killed because of the color of his skin or his hair style. Grateful to my sister Dana for teaching me and dealing with my clumsy, imperfect attempts at protesting, honoring and standing in solidarity."

Gene might be a baby still with only baby concerns to consume him, but he is already getting an important education from his mom. Has been, in fact, since he was in her tummy. He is already learning that making a difference in the world requires consistency. Requires sacrifice. And requires a woman like his mom Amy Schumer to use her platform whenever she's able.

More Like This
Pregnant Chrissy Teigen Cracked A Joke About Trump As She Shared A New Ultrasound Photo
Dr. Jill Biden Just Delivered Some Frank, But Powerful, Advice On Motherhood
25 Great TV Shows About School To Watch As A Family
Olivia Newton-John's Daughter Chloe Shared A Lovely Tribute To Her Mom After Her Death