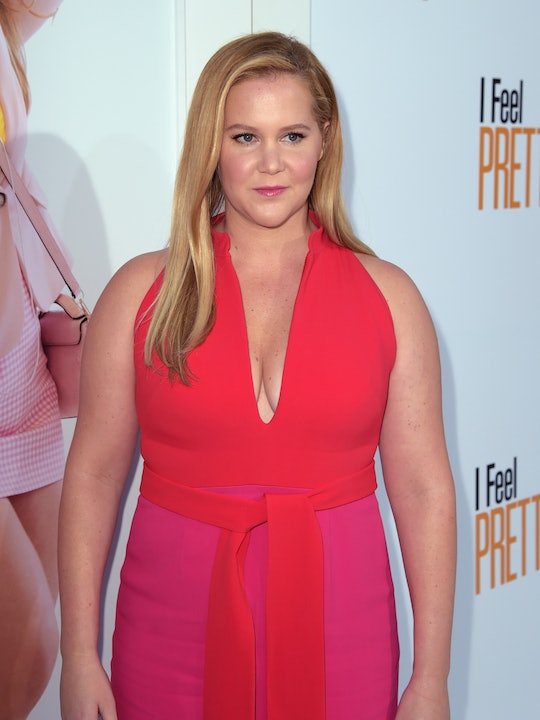 Amy Schumer's sense of humor has carried her through a lot of things — including an incredibly rough pregnancy. Since Schumer opened up about her diagnosis with hyperemesis gravidarum she has't been shy about sharing all of the details, but of course, is light hearted about it. After all, she is a comedian. So, it makes sense that Amy Schumer's new pregnancy update proves she's not letting her morning sickness get her down, like, at all.

Schumer is spending the first few days of the new year in the best way possible — relaxing on some beach, somewhere. Sure, she has been doing a lot of throwing up, which makes this "vacation" all the more necessary for her. But just because she's getting a break from home, doesn't mean she's getting a break from her HG, which she revealed she was diagnosed with in November, according to TODAY. She revealed in a hilarious Instagram post on Friday that she is still suffering from her severe morning sickness, even while she is in a tropical location.

"I puke anything I eat up until 4 p.m.," Schumer wrote in the caption of the video. "But then I'm like...#baywatch #eyecandy."

In the video, Schumer can be seen running down the beach in slow motion looking absolutely radiant. It's as if her HG gave her super powers.

Other celebrities seem to think so, too, taking to the comments of her post to show their support for the mom-to-be.

"I'm so sorry girl," fellow mom and singer, Vanessa Carlton, wrote. "I really feel that you will be rewarded with the best kid in the world for this level of torture. I think that's how the law works."

And everyone else was just as sympathetic to Schumer's woes.

"You go girl!!," one commenter wrote.

Needless to say, Schumer has a ton of support from her friends and fans. And that's something she's going to need well into this new year. Schumer is reportedly due in Spring 2019, and revealed on TODAY earlier this week that she is "halfway through" her pregnancy, which means she has plenty more weeks of pregnancy (and suffering) to go through. But if she has this much strength to run down the beach and looks this good while doing it, it definitely seems like she will be strong enough to get through it all — even the very, very bad parts.

As previously stated, Schumer hasn't been shy about the struggles she's had throughout her pregnancy. It's incredible that Schumer had the strength to run down the beach at all. During her appearance on TODAY earlier this week, she said that she has barely had enough energy to do anything at all.

"I'm so sick in the morning right now that I eat in bed and I just lay there and pet my dog," Schumer said.

But there are some things that have made her feel better. Schumer has enlisted the help of her Instagram followers to get her through these tough times, asking them to send her pictures of their kids and dogs to make her feel better. And at the end of the last month, Schumer wrote that she was "laughing into 2019" to cope with her sickness, according to People.

It seems like Schumer is also running into 2019, too, with her newest Instagram post. Although she might be suffering, her struggle is now halfway over — and Schumer has plenty of encouragement from her followers to keep on going and keep on running.