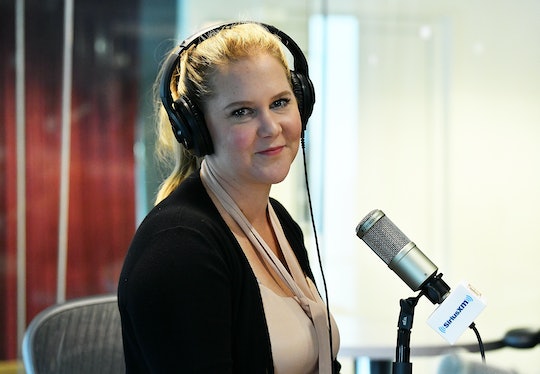 I think we all probably know those people in the world who use outdated words and phrases. Perhaps I have an uncle or two who drops uncomfortable comments at the dinner table every now and then and if you say anything, they mutter about "political correctness" like it's some sort of disease. When, in fact, updating the way we talk about issues simply means we are learning more and informing our conversations with better information. It can be something small, like the way people discuss people living on the autism spectrum. Which is why Amy Schumer's response to how she'd "cope" if Gene, her 3-month-old son, had autism is genuinely important. It's all about education, folks.

Schumer is mom to her baby boy Gene with husband, chef Chris Fischer. Back in March, the I Feel Pretty actress opened up about the fact that her husband had been diagnosed with autism on her Netflix comedy special Growing. She explained on an episode of Late Night With Seth Meyers at the time, according to CNN, that both she and Fischer wanted to discuss his diagnosis openly in the hopes that, in the near future, there would no longer be a stigma attached to it.

"That's why we both wanted to talk about it because it's been totally positive," Schumer told Seth Meyers. "I think a lot of people resist getting diagnosed and even some of their children because of the stigma that comes along with it."

Schumer has been open about the fact that she considers her husband's autism diagnosis to be one of the qualities she loves most about him. In fact, according to Women's Health, she pointed out in her Netflix special Growing that she sensed a difference in him early on: "I knew from the beginning my husband's brain was a little different than mine. My husband was diagnosed with what used to be called Asperger's. He has autism spectrum disorder. He's on the spectrum. And there were some signs early on."

And if she sees those same signs in her son Gene as he gets older? When one fan asked Schumer in the comments of new photo of her son on her Instagram page how she would "cope" if Gene was diagnosed with autism, of course the actress had the perfect response, writing:

how I cope? I don’t see being on the spectrum as a negative thing. My husband is my favorite person I’ve ever met. He’s kind, hilarious, interesting and talented and I admire him. Am I supposed to hope my son isn’t like that? I will pay attention and try and provide him with the tools he needs to overcome whatever challenges come up like all parents. I’d be disappointed if he liked the Big Bang theory and nascar not if he has ASD.

While the original poster apologized, Schumer's response is important for several reasons. First of all, she is making it clear that neither she nor presumably her husband see autism as a burden to be borne. Instead she highlights the fact that her husband's brain works differently and she loves it. That people living with autism should be celebrated for exactly the people they are within their diagnosis. And if her son is like his father? All the better for her.

Although I do feel a bit shamed for watching The Big Bang Theory a few times now...