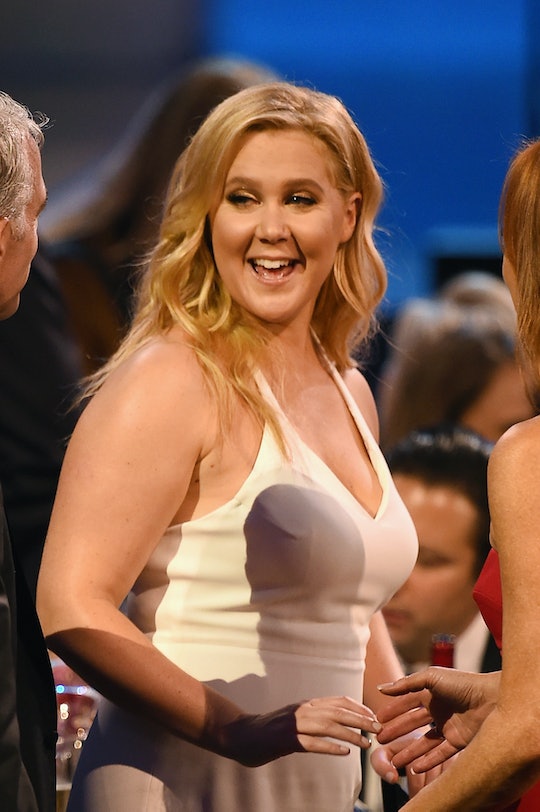 When you picture the "miracle of childbirth," you likely skip over the vivid image of what that little miracle looks like on its way out — at least I do, anyway. But in case you were wondering what crowning does look like, Amy Schumer's sister-in-law gifted her a baby cake and it's, uhm, very lifelike. And so that her followers wouldn't miss out on that baked beauty, Schumer posted it to her Instagram. You're welcome.

Schumer posted the crowning cake to her feed early on Monday morning, allowing you to start your day off right. "My sister in law," she wrote beneath the series of photos. "And I can’t stress that enough IN LAW. surprised me with a horrifying cake and i can’t thank her enough. So I won’t thank her at all. @mofischhh something is truly wrong with you and i love you." Schumer wrote, added the hashtags #haunting and, yeah, #butthole (this hashtag takes you nowhere. Saved you a click.)

The mom-to-be's many followers were amused by the cake and called her sister-in-law "a genius," "brilliant," and "too much." Like Schumer, they didn't quite know how to respond to the image. "OMG!!! That is frightening yet hilarious," one person wrote. Another added ominously, "It’s pretty accurate..."

And while the cake may not be everyone's cup of tea, it seems wholly appropriate for someone with Schumer's sense of humor. The comedian has been amusing her followers all throughout her journey to motherhood, since announcing her pregnancy back in October.

"Chris and I are thrilled and almost positive he's the father," she said in a statement at the time, according to the Los Angeles Times. "I look forward to competing with [Meghan] Markle every step of the way."

Even her explanation to Ellen DeGeneres back in April of what changed her mind about being a mom was steeped in humor. "Here's the thing. I have never wanted kids. Then I saw myself as a baby on your show and I thought, 'Who am I to deprive the world of such a beautiful baby?'" she said, according to E! News. "So I think we're going to do it, but just use my genetics."

But not everything leading up to her delivery — which is may be just around the corner — has been a laughing matter. Schumer was hospitalized in November for hyperemesis gravidarum, an extreme form of morning sickness, according to ABC News. She explained the toll her illness was taking on her in an Instagram post of her in the hospital:

I'm fine. Baby’s fine but everyone who says the 2nd trimester is better is not telling the full story. I’ve been even more ill this trimester. I have hyperemesis and it blows. Very lucky to be pregnant but this is some bullsh*t!

The severe nausea and dehydration has even forced her to cancel a few of her shows. Before a show in Tarrytown, New York, Schumer posted a video of herself vomiting as a means of explanation. "Turn sound off if you have a weak stomach ... I love doing stand-up more than anything and I hate canceling shows. I have to postpone some until I feel human again," she captioned the video.

Hopefully all of the stomach problems have passed now that Schumer is in her third trimester. But even if she isn't feeling completely herself again just yet, she certainly hasn't lost her sense of humor. And on the days when she's feeling less humorous than most, it looks like her sister-in-law is there to remind her of the humor in everything — including labor and delivery.

I can't wait to see what kind of punchlines come out of the endless dirty diapers and spit-up stains that await her!