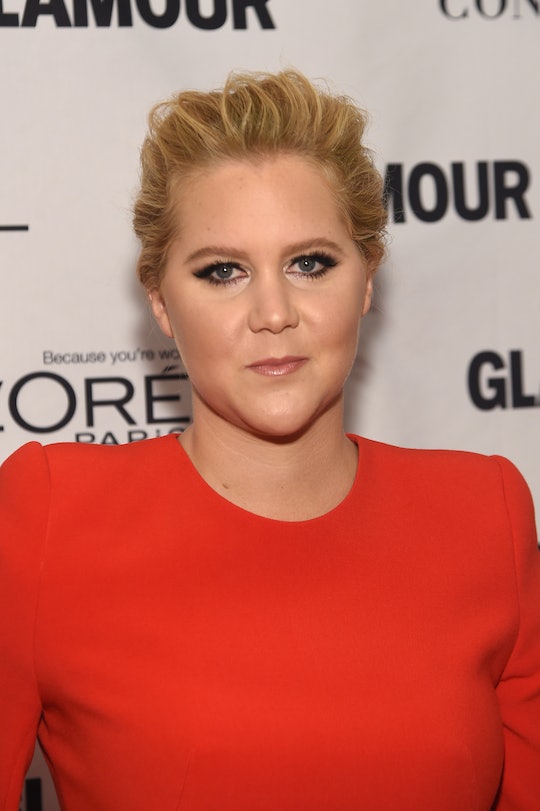 One of the most difficult things about pregnancy is that feeling you get like you aren't the boss of your body anymore. That someone else is driving the bus for perhaps the first time in your life, and you're just sort of along for the ride. It's tough to make plans, to make choices, to really know what your pregnancy is going to dictate from one day to the next. A fact that is so perfectly highlighted in a video Amy Schumer shared of herself vomiting in a car before a scheduled stand-up performance. Because her pregnant body isn't going to give her a break just because she has something important to do. And I guess this is a great lesson for becoming a parent, now that I think about it.

On Tuesday, Nov. 27, Schumer was on route to perform at a comedy event at the Tarrytown Music Hall in New York when she was struck with a particularly nasty bout of nausea in the car. I'm not going to call it morning sickness because this has always felt like a cruel joke to me; it can happen anytime, anywhere, and it's unkind to give pregnant women the idea that it will just strike in the mornings. Case in point: this video of poor Amy Schumer vomiting in a car in the evening.

It's a bit graphic, by the way, so if you don't have the strongest gag reflex you might want to take Schumer's advice and "turn off the sound if you have a weak stomach."

In a lengthy Instagram post, Schumer explained that she is going to have to start to postpone some of her scheduled live performances "until I feel human again."

Although that being said, she did actually manage to put on a show for Tarrytown in her "sweatpants and slippers," as evidenced by a picture she shared from the end of the night where the audience was giving her a standing ovation.

Despite her struggles, Schumer went on to say she was "so grateful and excited to be a mom. I’m grateful I have access to healthcare, as we all should have." Which is a truly valid point; after all, it's only been a few weeks since Schumer was hospitalized for hyperemesis gravidarum, a condition that causes some pregnant women to suffer from severe nausea, vomiting, and possible dehydration. She was in her second trimester and was forced to cancel a performance in Texas due to her hospitalization, as she shared on Instagram.

I think it's so important for high profile, outspoken celebrities like Amy Schumer to share their pregnancy struggles. Since she and her husband Chris Fischer announced they were expecting their first child in October, Schumer has been characteristically open with her experience. Even when her pregnancy gets in the way of living her life, which is so helpful.

It's easy for women to tell ourselves that pregnancy shouldn't slow us down, that we can continue on with our lives without interruption. But the fact of the matter is that your body is not just your own any more. You can't control what's going to happen and, just like Amy Schumer, sometimes your pregnancy is going to be the boss. So give yourself a break.