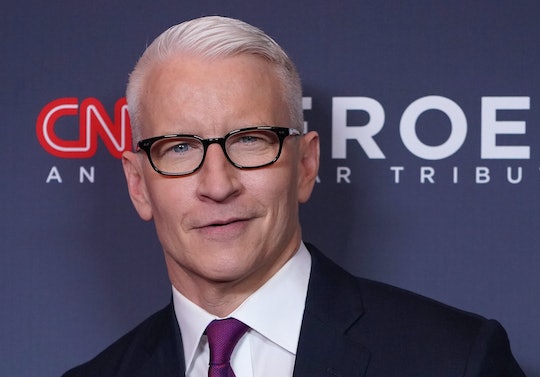 With several truly adorable photos, Anderson Cooper announced the birth of his son. On Thursday evening, the CNN news anchor revealed that he welcomed a son named Wyatt Morgan Cooper earlier in the week and also shared the emotional significance behind his name.

"I want to share with you some joyful news. On Monday, I became a father," Cooper captioned a series of photos on Instagram. "This is Wyatt Cooper. He is three days old."

"He is named after my father, who died when I was ten. I hope I can be as good a dad as he was," Cooper continued. "My son's middle name is Morgan. It's a family name on my mom's side. I know my mom and dad liked the name morgan because I recently found a list they made 52 years ago when they were trying to think of names for me. Wyatt Morgan Cooper. My son."

The new dad also shared that his newborn son weighed 7.2 pounds at birth. "He is sweet, and soft, and healthy and I am beyond happy," Cooper wrote. Wyatt arrived via surrogate, and the proud dad wrote that he is "grateful to a remarkable surrogate who carried Wyatt, and watched over him lovingly, and tenderly, and gave birth to him." He explained that his surrogate has a family of her own, and is "thankful for all the support they have given Wyatt and me."

Cooper spoke publicly about the birth of his baby boy during a Thursday CNN Town Hall, sharing that he had become a father. "I've never actually said that before, out loud, and it still kind of astonishes me," he said.

The new dad also opened up about the fact that he didn't think he would get the chance to be a father. "As a gay kid, I never thought it would be possible to have a child, and I’m grateful for all those who have paved the way, and for the doctors and nurses and everyone involved in my son's birth," he wrote.

Cooper's friend Andy Cohen, who became a father himself to baby boy Benjamin in February 2019, shared the news on his own Instagram page with the message, "'new life, new hope!' Wyatt Cooper, you couldn’t have come at a better time! I know a friend who can’t wait to meet you."