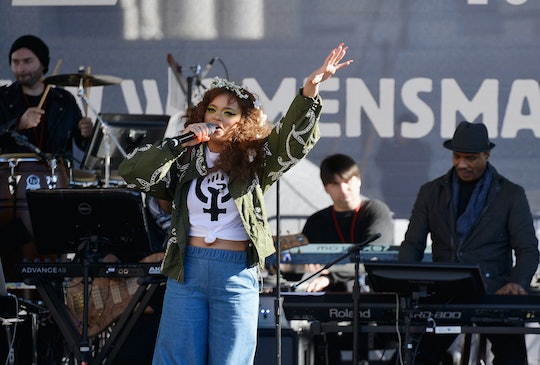 Apparently it's not just us common folk who are totally inspired by Rihanna — so are some other major music stars. Andra Day, bad*ss singer-songwriter nominated for a Best Song Written for Visual Media Grammy, showed up on the red carpet looking familiar. In fact, Twitter's pretty convinced Andra Day dressed as Rihanna at The Grammys and they're really not wrong. I mean, Rihanna has a look, you know? When Day showed up on the red carpet, nearly everyone did a double take.

But honestly, even if she wore a pair of leggings on the red carpet, Day would probably earn herself some chatter. The mega-talented star is more than just a doppleganger of Rihanna tonight — she's earned her right to be at the 2018 Grammys. This year Day actually got to announce the nominees in the four general categories: best new year, record of the year, song of the year, and album of the year, reported Variety and is no stranger to hoping for a win herself. Day's debut single, "Rise Up," got her some major props back in 2015 and earned her first Grammy nomination for Best R&B Performance and Best R&B Album for Cheers to the Fall, according to the Grammys website.

But let's talk about this look she's rocking on the red carpet tonight. You guys, Twitter is seriously confused. It seems that a majority of people (myself included) caught a glimpse of Day on the red carpet and thought, "Oh Rihanna, you are killing it in that pink and red." But on a closer look — nope. That's Andra Day slaying all over the place.

The Rihanna comparisons aren't totally off the wall though. Not only is Day looking a lot like Ri, but apparently people have made comparisons about the two superstars before. In an interview with ABC News Radio, Day was asked about the comparisons she often receives between her and Rihanna, along with Amy Winehouse and Adele. "I usually get, 'You look like Rihanna, you sound like Amy Winehouse, Adele.' So I mean obviously it's a compliment, you know, she's a beautiful girl, Amy was an incredible talent. So it doesn't bother me at all," Andra explains, "I think because hearing a comparison is never something that's going to deter me from being me."

I mean, she's not wrong. If someone told me they had mistaken me for Rihanna, I would faint because A) that's the biggest lie anyone has ever told and B) Rihanna is a goddess and I'll take any comparison to her I can get.

Considering Rihanna wasn't seen on the red carpet this year, it's kind of funny how much Day's look mimicked Ri's. But the two are definitely stellar, bad*ss stars all on their own and any comparison between the two is a serious compliment. Who knows, maybe Rihanna looked in the mirror as she dressed for the Grammys today and thought, "Man, I look just like Andra Day."

But if you saw Day on the red carpet and gave yourself whiplash trying to catch a glimpse at Rihanna, you're not alone. I'm still not sure if it was the red lipstick, the hair, or just that Day already looks like Rihanna, even in a pair of jeans and a top, but she truly does look like RiRi's sister tonight. Day should be presenting later in the evening and I can't wait to see if she does an outfit change or if she comes out, confusing everyone, by looking just like another musical powerhouse. Guys, what if Rihanna and Day come out together? Twitter might explode.