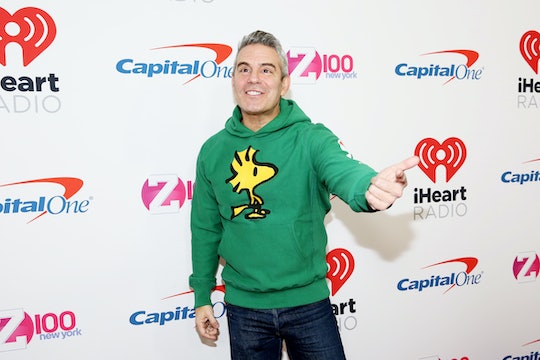 How many baby showers did you get? One maybe, if you're lucky, right? Or maybe a couple of smaller "sprinkles"? And if you're anything like me, there were probably zero celebrities on hand, not that you want to be the kind of person who would like it if celebrities were on hand for your baby shower, I'm just saying. Some people might be living with a little more polish than the rest. Like Andy Cohen, for instance. As if his first baby shower wasn't splashy enough, Cohen's second baby shower was extra fabulous thanks to his seemingly endless entourage of famous friends.

It's only been about a month since the Love Connection host and Bravo boss announced he was expecting a baby during a Watch What Happens Live With Andy Cohen interview. At the time, he was interviewing some of the original housewives from the Real Housewives franchise, and he couldn't wait to share his happy news. Then he told Anderson Cooper during CNN's New Year's Eve show that he was expecting a son, saying as per Entertainment Tonight, "It's a boy. And, I got to tell you something, I can not wait to meet this boy. I think he’s going to have a nice Semitic head of hair. I'm so excited I think about nothing else. I just never thought it would be possible as a gay man to grow up and have a family. And, then here we are in 2018, almost [2019], and anything's possible."

Like a baby shower hosted by Kelly Ripa and Sarah Jessica Parker, for instance. That is now possible.

Cohen and his baby boy, who is expected to be born within the next few weeks, are being feted on both coasts. The most recent baby shower was an East Coast event with Ripa, Sarah Jessica Parker, and Anderson Cooper in attendance. As Cohen wrote in a sweet Instagram post about the weekend event in New York City:

I had a heart-boner for days after this crew threw me an equally epic affair on the East Coast. I feel loved & it’s all going to the 👶. Thank you

While a baby shower hosted by Sarah Jessica Parker and Kelly Ripa is clearly a notch above, it appeared to be a tame event in comparison to the West Coast baby shower. Just a week ago, Cohen and his baby boy were being celebrated with a raucous party in Los Angeles by the Real Housewives Of Beverly Hills at The Palm. How raucous, you ask? Well, despite the fact that it was a luncheon, there was some table dancing by famous housewives like Lisa Rinna, as Cohen shared in an epic Instagram video.

Call me crazy but do these two parties not epitomize the whole East Coast/West Coast sensibility? No? Well, I think they should.

At the very least, Cohen's little boy is going to grow up in a world filled with color and joy and happiness... and people on both coasts who are just excited to see him enter this world.