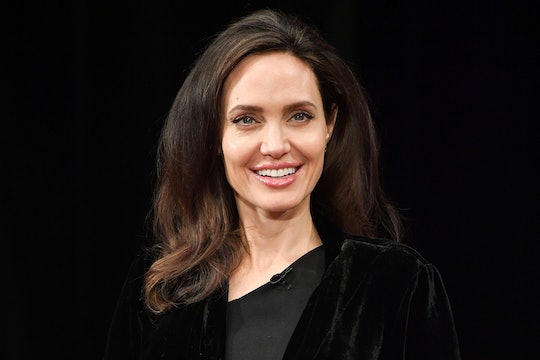 Angelina Jolie leads quite the impressive life, all the way from her directing achievements to her work with the United Nations. Still, for all of these accomplishments, Jolie seems to regard motherhood as one of her most treasured roles to date. This sentiment was clearly evident during a recent movie premiere when Angelina Jolie gushed about her kids on the red carpet.

The latest update on Jolie's family life came to be when she showed up with five out of her six kids to celebrate the upcoming debut of her new movie, Maleficent: Mistress of Evil, according to Us Weekly. The actor was spotted with Pax, 15, Zahara, 14, Shiloh, 13, and twins Knox and Vivienne, 11. Oldest kid Maddox, 18, likely didn't attend because he just started college in August at South Korea’s Yonsei University. He's probably too busy prepping for midterms to join his mom back home in Los Angeles.

The Oscar winner opened up about the film while there, noting how it presents strong themes of diversity and equality. “I think there are many things and many different themes, from the strength of a family to the importance of equality and strength in diversity,” she said about the sequel. “There’s something really truly for everybody."

But while Jolie was of course there to represent the new movie, her pride in her family took center stage in her conversations with the press.

"I just sent one off [to college]. I'm so proud of him," Jolie told Entertainment Tonight at the event, which took place at Hollywood's legendary El Capitan theatre, according to the Daily Mail. "I'm so excited, I feel like my world expands as their world expands. I learn so much from them and I love this stage."

As for the idea that Jolie is always in charge of her family, the star — who divorced Brad Pitt in September 2016 — laughed at the notion that she has it all under control. "They wrangle me," she told ET's Nischelle Turner. "Honestly, they're more together [than I am]. Zahara's the most organized in the family...It's just so wonderful to have their [support]... They're my friends."

Jolie seems to have a great family system going, even down to her own dad, actor Jon Voigt. Speaking of Voigt, he had nothing but amazing things to say about Jolie's parenting skills. “She’s good at it,” he said while attending the premiere. "She’s a really good, good mommy...It’s just how she lives her life."

Jolie seems to be a great personal point, too, as she finally feels "free" at this point in her life. "There have been times in my life where I have felt — and maybe I've hidden them well from the public — where I have not felt free... I have felt small," she explained, according to the Daily Mail. "I have felt cornered. And it has taken a lot to find that again, probably more of that today than I [felt] in the last four years."

I'm glad Jolie seems to be doing so well these days. And although there have been rumblings in the past that Jolie may go on to do something unexpected, like run for office, it seems clear she has nailed her most prized job — mom.