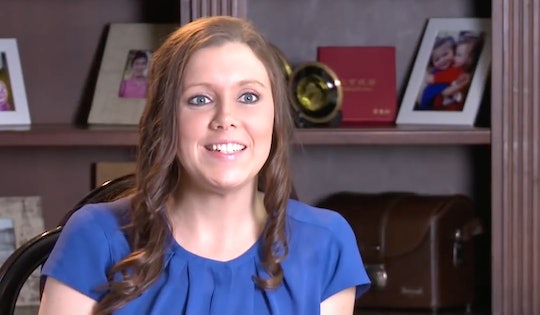 Members of the Duggar family aren't afraid of being honest with their fans, which is probably because they've had cameras documenting their lives for a very long time. On Instagram, Josh Duggar's wife, Anna Duggar, has let fans in on some very real moments in her life. And over the weekend, Anna Duggar opened up about baby Mason's allergy and how her family of five coped with it so far.

Anna gave birth to the first Duggar grandkid ever, Mackynzie, in October 2009, according to People and since then, she and Josh have welcomed four more kids into their brood. The two are parents to their 7-year-old son Michael, 5-year-old son Marcus, 3-year-old daughter Meredith, and 11-month-old son, Marcus. But just ahead of Marcus' first birthday on Sept. 12, according to Us Weekly, Anna posted about one shocking discovery about their son — that he has a very specific allergy.

In a new Instagram post on Saturday, Anna shared a cute video of Marcus trying dairy free pancakes for the first time ever. In the video, Marcus can be seen apprehensively taking a bite of his first pancake, but after he looked at his siblings (who were eating their own pancakes) for guidance, he got a little more enthusiastic about the new food, throwing his hands up in the air in celebration.

But Anna's post also revealed something very special — Mason is allergic to milk protein, or dairy.

Anna explained how she found out about Mason's allergy (and how she helped him) in the caption of the post:

Lil Mason has a milk protein allergy. Allergies showed up at 2 weeks, which caused us to switch to formula while momma cut dairy and other potential allergy causing foods out of my diet (i.e. gluten, corn, soy, eggs, nuts, chicken, and nightshade foods). Thankfully, as we added things back into my diet, we discovered Mason was only allergic to dairy, and by January he was back to 100 percent nursing and thriving — reaching 20 pounds at six months!

Allergies are difficult for everyone, especially in a house with many kids. But Anna's dedication to helping her son figure out what was causing him to react to certain things and get him comfortable and healthy again is admirable, especially since it seems like she hadn't experienced this before. But her son's allergy can also be a learning experience for her followers who are going through the same thing with their own children.

Milk allergies are pretty common in infants (around 2 to 3 percent of infants have one), according to KidsHealth. Although most kids with this allergy are allergic to cow's milk, according to TheBump, there is still a percentage of kids who are allergic to milk protein, even when they are breastfed, just like Mason. There are many symptoms of this allergy, according to Nestlé Health Science; it shows up in problems with their digestion, skin, and even in the way kids breathe. However, milk allergies and lactose intolerance are not the same thing, according to Everyday Health — the symptoms of a milk allergy are typically more severe.

After Mason suffered with his allergy for four months, based on Anna's Instagram post, his family clearly learned to adapt their lives to it.

The comments on Anna's post were nothing but supportive with fans and family members taking to Instagram to share their well wishes and tips for the mom.

"Cashew cheese is yummy! Mellow Mushroom has a delicious pizza made with it!" Anna's sister-in-law Jill Duggar commented.

"Thank you," another commenter added. "What a beautiful encouraging message."

It seems as if Mason has his family members willing to help him out in other ways, too. Last week, Anna posted the cutest video of her youngest daughter, Meredith, trying to teach Mason how to walk, according to In Touch Weekly, proving that the whole family is more than willing to help Mason in a way that isn't just abstaining from dairy.

Although Mason's allergy might be hard on her family, Anna ended her Instagram post on Saturday on a positive note. "Sometimes in life we are faced with a mountain that seems impossible," Anna wrote in the caption of the photo. "To have a mountain top experience you must climb the mountain!"

Mason definitely climbed his impossible mountain to enjoy eating dairy free pancakes for the first time — and now he has so many years ahead of him to love eating pancakes... and perhaps some dairy free pizza?