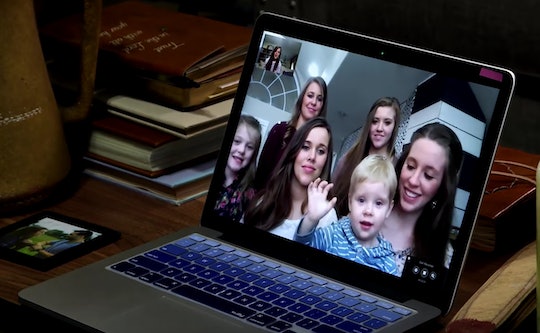 It seems obvious to state, but there are a lot of people in the Duggar family. Along with mom Michelle and dad Jim Bob, there are 19 siblings — and as they get older, they are now welcoming kids of their own, meaning their family keeps on growing. It's safe to say that the Duggar grandkids will soon outnumber their aunts and uncles. But before that happens, a lowdown on each Duggar grandchild is absolutely necessary for fans to get familiar with the newest generation.

When Jim Bob and Michelle welcomed their first child, Josh Duggar, in 1988, it's a little unclear if they knew just where their lives would take them and just how many grandchildren they would eventually have. But since Jim Bob and Michelle have a lot of experience with having babies in their house, it's no surprise that they're more than happy to have a lot of grandkids.

After Jill Duggar gave birth to the fourth Duggar grandchild in 2015, Jim Bob had a sense of humor about their expanding family, according to Us Weekly. "Yeah, so... four grandkids and counting," Jim Bob said in a statement at the time. "Going on 200!" While they haven't exactly reached 200 grandkids, at this rate, 200 might not be too far off.

But until then, here's everything you need to know about all 12 of the Duggar grandkids right now.

The oldest Duggar sibling, Josh Duggar, was the first of his siblings to move out of the family home, get married to his wife, Anna, in 2008, and have the first Duggar grandkid ever, according to People. It was clear from the start that Josh and Anna were going to have a large family — in their wedding vows, the couple said that they would leave the amount of kids they would have "up to God," according to People. Josh also maintained another popular Duggar family tradition when he and Anna chose to name all of their kids names beginning with the letter "M."

It didn't come as surprise to anyone when Anna gave birth to their first child, Mackynzie, just a little over a year after their wedding, according to People. Mackynzie Reneé Duggar was born on Oct. 9, 2009, at her parent's home after Anna had a successful home birth, according to People.

Now that she is eight years old, Mackynzie might already have a future career planned out for her. This month, the youngest Duggar girls — Johannah, Jennifer, Jordyn, Josie, and Mackynzie released an album, Happy Heart, where each girl sings religious songs, according to the Ashley's Reality Roundup. What an accomplishment for someone her age.

Two years after Mackynzie's birth, Josh and Anna welcomed their first son, Michael James Duggar, on June 15, 2011, according to Duggar Family Blog. Just like Mackynzie, Anna had a home birth with Michael. Michael's birth was significant, according to People, because it confirmed that Josh and Anna were going with "M" names for their kids.

Almost two years after Michael was born, Josh and Anna's third child, Marcus Anthony Duggar was born on June 7, 2013, according to TODAY. In a statement after Marcus' birth, Josh and Anna told TODAY that the whole family was super excited for his arrival. "Mackynzie and Michael are thrilled to have a little brother and we are so thankful that mom and baby are well!," they said. "We are blessed to have our family close as we celebrate this gift from God."

After two boys in a row, Josh and Anna welcomed their second daughter, Meredith Grace, into the world on July 19, 2015, according to the Daily Mail. Just like her sister, Meredith is already showing an interest in singing, according to InTouch Weekly, and her mom has already seemed to notice, posting the most adorable video to Instagram of the 2-year-old singing last month.

Almost one year ago on Sept. 12, 2017, Anna gave birth to her fifth child, Mason Garrett Duggar, according to Us Weekly. "He arrived today without complication and we already adore him," the Duggar family wrote in a statement on their website last year. "The entire family is ecstatic over the arrival of another beautiful blessing."

Fans watched Jill Duggar fall in love with her husband, Derick Dillard, on TLC's 19 Kids & Counting in 2013 when she visited Dillard in Nepal where he was doing humanitarian work at the time, according to InTouch Weekly. It was there where they entered a courtship — and one year later, on June 21, 2014, they married. Since then, they have welcomed two kids together and seem to be very happy.

On April 6, 2015, Jill and Derick welcomed their first child together — a son, named Israel. At the time of his birth, Israel reportedly broke records for being the longest baby delivered in the hospital that year — he measured a whopping 23 inches long and weighed 9 pounds, 10 ounces, at the time of his birth. But Israel's birth didn't necessarily go without a hitch. Jill was in close to 70 hours of labor, according to People, and had to be rushed to the hospital after she wasn't able to deliver at home.

Since then, Israel has grown up to a very happy three year old who has just started home school, according to InTouch Weekly — and fans have been able to see this on Jill's Instagram account.

On July 8, 2017, Jill and Derick welcomed their second son, Samuel Scott, into the world, according to People. But just like his big brother, Samuel's birth wasn't the easiest for Jill. Jill delivered Samuel by C-section in the hospital after 40 hours of birth, according to People. Samuel's birth was understandably scary because he was reportedly born with fluid in his lungs, according to InTouch Weekly. But since then, Samuel is happy, healthy, and just celebrated his first birthday.

After one year of dating, Jessa Duggar married Ben Seewald on Nov. 1, 2014, according to People, and like her parents, Jessa was eager to start a family.

Jessa and Ben welcomed their first son, Spurgeon Seewald, into the world on Nov. 5, 2015, according to People. But just like her older sister, Jessa experienced some complications when it came time to deliver her son. Jessa had an all natural birth at home but was rushed to the hospital after she began bleeding after birth, according to People.

On Feb. 6, 2017, Jessa gave birth to her second son, Henry, according to People and it went so seamlessly that Michelle nearly missed the birth.

Since giving birth to her two sons, everything in Jessa's life has been pretty much smooth sailing — she is super honest about her life as a mom on social media and isn't afraid to hide things from her followers. But her honesty with fans has made her a target for mom-shaming, according to OK!.

Now that she has two kids, that isn't to say that she doesn't want more. In this season of Counting On, Jill and Ben do discuss having more kids in the future and Jessa recently admitted to Us Weekly that she has baby fever. So, fans might want to be on bump watch in the near future.

The most recent addition to the Duggar family has been a very exciting one. On July 19, 2018, Jinger Duggar and her husband, Jeremy Vuolo welcomed their first child — a daughter named Felicity Nicole — and they are so in love with her, according to Us Weekly.

"It's been so incredible," Jinger told Us Weekly. "We can't stop staring at her little face."

Joseph Duggar and his wife, Kendra, welcomed their first child — a son named Garrett David Duggar — on June 8, 2018, according to E! News. During the couple's birth special, which was shared on TLC's website weeks after Kendra gave birth, fans got a special look into the couple's life, which is a little more private than Joseph's siblings. In the special, it was revealed that Kendra and her mother had been pregnant at the same time and that she was afraid to give birth to Garrett because she "doesn't breathe" when she is nervous.

Although the couple does not have their own Instagram account — so they don't get to see a lot of photos of Garrett — fans have been able to follow along with their journey as a couple on this season of TLC's Counting On.

On Feb. 23, 2018, Joy-Anna Duggar gave birth to her first child — a son named Gideon, according to Us Weekly. His birth came a little more than nine months after Joy-Anna married her husband, Austin Forsyth, according to People.

But Joy-Anna experienced some complications with her labor, just like her sisters did. Joy-Anna had planned to give birth to her baby at home, according to People. But, after 20 hours of labor, her midwife determined that her baby had been in breech and Joy-Anna was forced to deliver her baby by an emergency C-section at the hospital.

In spite of the scary start of his life, Gideon has turned out to be the cutest little boy and had even had some fans calling him "Austin's twin," according to OK!.

But just because there are no members of the Duggar family that are currently pregnant doesn't mean that there won't be any announcements in the near future. Fans can always count on the Duggar family to be expanding in one way or another.