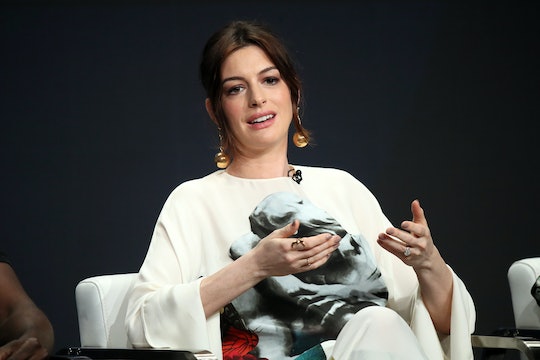 Anne Hathaway Reveals Why She's Speaking Out About Her Fertility Struggles

Just a week after the Devil Wears Prada actress announced her second pregnancy, Anne Hathaway discussed her fertility struggles leading up to the happy news, while explaining why she decided to make her journey public. As it turns out, Hathaway had moving reason for speaking out on this important issue.

On July 24, the 36-year-old mom posted on her Instagram alongside a black-and-white baby bump photo, “For everyone going through infertility and conception hell, please know it was not a straight line to either of my pregnancies.”

Now Hathaway is explaining why she opened up about her own struggles with fertility publicly. While the actress revealed in an interview with ET Online that she was “really happy” about the second pregnancy, she also said that she felt it was important for her to show solidarity with those who have dealt with this issue.

“It's not [always a straight line]," she said. "There is a one-sided narrative to this, and of course it's wonderful that we celebrate the happy moment when it's ready to share. I think there is a silence around the moments before that and they are not all happy, and in fact a lot of them are quite painful. I think that pain is that these women feel like we're the only ones going through it.”

In regards to her announcement specifically, Hathaway said she was conscious of how it could potentially affect her fans.

“I just knew that somewhere my announcement was going to make somebody feel worse about themselves because — and it wouldn’t be their fault that that happened — you just can't help it when you want something so bad and it feels like it's happening to everyone else but you,” she continued in the interview. “And I just wanted that person to know that they're included in my story too and that my story didn't just have happy moments too.”

This isn’t the first time the beloved actress has come forward about pregnancy in a raw and honest way. After she gave birth to her first child, now-3-year-old Jonathan, Hathaway was candid when discussing her postpartum body.

In an August 2016 Instagram post, she shared a picture of her altered jeans, with the caption, “There is no shame in gaining weight during pregnancy (or ever). There is no shame if it takes longer than you think it will to lose the weight (if you want to lose it at all). There is no shame in finally breaking down and making your own jean shorts because last summer's are just too dang short for this summer's thighs. Bodies change. Bodies grow. Bodies shrink. It's all love (don't let anyone tell you otherwise.)” *Slow claps*

One month later, in an interview at the Toronto International Film Festival, she said in reference to the evolution of her body, according to Entertainment Weekly: “I think shape is an ongoing thing in everybody's life. So, I'm not trying to recapture something that was. I'm going with what it is now.”

In sharing her struggles with fertility, Hathaway is reaching out to many people who face similar uphill battles when trying to get pregnant. According to the Office of Population Affairs, infertility is common, with 12 to 13 couples out of every 100 in the United States having trouble getting pregnant. According to the Centers for Disease Control and Prevention (CDC), about 6.1 million women in the country will have trouble getting or staying pregnant.

While Hathaway’s pregnancy has brought joy to many fans, her honesty is just as refreshing for those facing similar struggles.