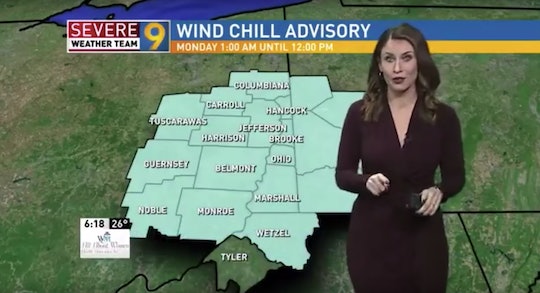 Another Pregnant Newscaster Got Body-Shamed & Ugh, This *Really* Needs To Stop

Sometimes it's so discouraging to realize that there are women out there who love to tear other women down, as if life weren't already hard enough. This week, another pregnant newscaster was body shamed for having a bump on air, which is the most ridiculous thing of all. Mary Ours is a meteorologist for a western Pennsylvania ABC News affiliate.

Someone commented on the station's public Facebook page that the anchor needed some "fashion consulting." Ours responded to the comment on the network's page, telling the woman that there was nothing wrong with her dress but that she should feel free to send her some more options.

The woman then wrote back that she would have to know what size the first one was, so as to send a larger one. Ours clapped back and told her to stop body-shaming a pregnant woman and reminded the woman that she should be lifting women up instead of bringing them down.

Ours later took to her own Facebook page to share her experience. She wrote that the most discouraging thing about the comments is that they often come from women, who are emboldened to say whatever they want about a woman's size or body, which is absurd.

Ours wrote, "We as women should be supporting each other not putting each other down. As the saying goes, if you don't have something nice to say, don't say it at all."

Instead of bashing the woman for her rude and mean comments, Ours made a pledge to teach her daughter that that's not how kind people act. She wrote in her Facebook post:

I want her to know that it is okay to stand up for yourself and be happy in your own skin, so hopefully I can teach her that. As I become a mother soon, I feel I owe it to myself to try and make a difference and put a stop to the online bullying and body-shaming. I am growing a human, and I am doing my best.

Ours is not alone. Body-shaming newscasters sadly happens all the time, whether it's because some prude can't stand looking at a woman's shoulders while she reports the news, forcing her producers to hand her a sweater on live television, or a woman's "horrid gut and huge arms" are somehow so distracting a viewer who can't focus on the weather.

It's just awful, right? But calling out a pregnant woman for growing actual life in her uterus is a whole new level of despicable. Earlier this year, Georgia newscaster Laura Warren was 20 weeks pregnant and wore a red sheath dress on air. Any sane human being would have not even noticed — or if they did, think, "wow, she's having a baby!" or something, you now, kind.

Instead, a woman actually took time out of her day to leave a voicemail telling her to buy some maternity clothes at Target because she looked "disgusting" in her "too tight" outfits. Warren was just as outraged as you likely are at the message, noting that pregnancy is already hard enough on a woman's emotions, so to be bullied on top of that is just cruel.

But she shook it off, ending a blog post addressing the hate by saying that she was going to lead by example. "We are living in a culture tolerating, often even encouraging bullies. Politicians, angry Democrats and Republicans, anonymous keyboard warriors, social media bullies... How do we teach our kids to be kind when adults all around them can say such cruel things," Warren wrote.

She decided the best way was to say as many nice things as possible to people as she could and spread positive energy, which is not an easy thing to do when people are bashing you and your right to do your job without being bullied.

Send love to your local newscasters, especially when they're pregnant, because they apparently hurtful comments are far too abundant these days.