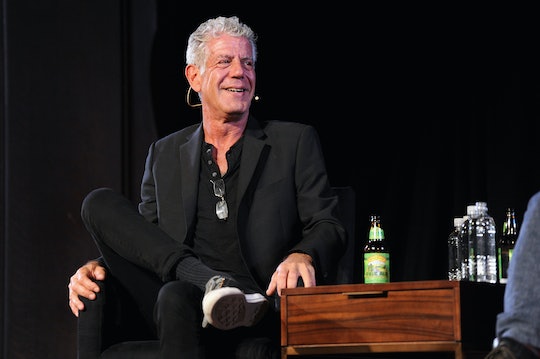 Legendary chef and television personality Anthony Bourdain would have turned 63 on Tuesday, June 25. Only those closest to him truly know how he would have liked to spend the day if he was still here; eating delicious food, almost certainly, and hopefully surrounding himself with people he loved. With one person he loved most especially, in fact: his daughter. Today, Bourdain's ex-wife, Ottavia Busia, paid tribute to the late chef on his birthday with a touching video featuring his little girl and it was lovely and heartbreaking in equal measures.

It has been just over one year since Anthony Bourdain died by suicide while on location in France, according to CNN. He died on June 8, 2018 leaving behind not just a legacy in culinary passion and excellence, but also the daughter he shared with Busia, 12-year-old Ariane. In the year since Bourdain's death, his friends, family, colleagues, and fans have rallied to make mental health awareness and suicide prevention another important legacy in his name as well.

Busia — who separated from Bourdain in 2016, according to People — shared a post on Tuesday to honor his birthday.

In the video, a young Ariane sits on her father's shoulders in a pool as he waits for instructions about what she would like him to do. She says, "Daddy, go under!" and so he does, swimming along as she rides on his bike and laughs. It's a poignant picture of a father and daughter who obviously loved each other.

Busia captioned the photo #BourdainDay. Two of Bourdain's close friends and chefs, Eric Ripert and José Andrés, have declared June 25 Bourdain Day in honor of their friend, according to Food & Wine.

The two chefs announced The Anthony Bourdain Legacy Scholarship at The Culinary Institute of America on his birthday, which was set up to help recipients pursue a semester abroad to experience different foods and different cultures.

"We were both lucky enough to have traveled the world with Anthony and experienced firsthand the impact he had on our culture, both here and abroad," the two chefs explained in a press release. "We hope that this scholarship will help his memory live on for students who want to experience the world as Anthony did — through cuisines and cultures everywhere."

This scholarship is a wonderful way to honor the public persona of Anthony Bourdain, but of course his family will want to celebrate the man they loved in their own way on Bourdain Day. A source close to the late chef once told People that Ariane was the light of his life, sharing: "It was quite evident that Tony was a ‘lighter’ human being around his daughter. When he spoke about her, his eyes danced. He talked about her constantly."

Here's hoping she remembers how much her father loved her, on his birthday and every day.