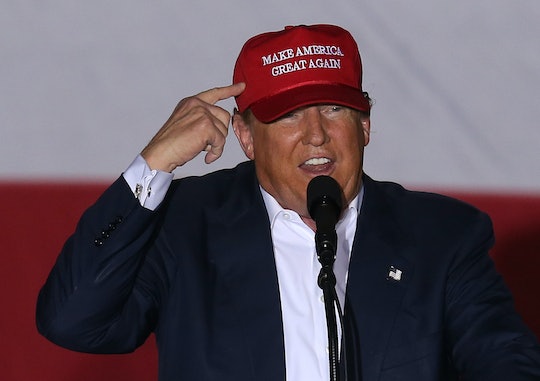 It should be interesting to see how Donald Trump talks his way around this latest anti-Trump ad. Or if he'll even bother. On Monday, an anti-Donald Trump ad that highlights real things the GOP candidate has said about women and mothers hit the internet — and it's pretty shocking, even for the most staunch Trump supporter.

Perhaps he'll feel like he has bigger fish to fry. To understand why, we need to take a look at his record so far: Republican presidential frontrunner Trump, who remains well in the lead after the most recent Republican debates, has been taking some heat lately over increasing incidents of violence at his political rallies. Everyone has an opinion on it, and it's set fire to the GOP's heels.

And yet, Trump has largely shrugged off the reports, as is his wont, even insisting in an interview with CNN that the outbursts weren't his fault. "First of all let's not even use the word violence, there's very little disruption generally speaking," he told the network. "It's a function of the press, the press likes to say what the press likes to say." In other words, the press just likes to make him look bad. Nobody was hurt. It's not his fault.

But what will he do this time around, when it's a case of his own actual words being brought back to haunt him? (And not by the press this time either.) The new ad, which was created by Our Principles PAC (a Republican Super PAC founded by Mitt Romney and Katie Packer) is elegant in its simplicity. It basically just features women quoting Trump verbatim and the results are jaw-dropping:

Again, these are his OWN words. In the Trump book, it seems that women who are flat-chested can't be a '10', which is what we're all meant to be striving for, I assume. And even if we manage to hit that perfect '10' like The Donald wants, it won't matter. Because, as he is quoted saying in the video (and note the attribution at the bottom of the ad for each quote), "Women, you've got to treat them like s**t." Think that's bad? It gets much, much worse — for moms especially.

"I like kids," one of the women in the video quotes Trump as saying. "I mean, I won't do anything to take care of them. I'll supply funds and she'll take care of the kids." Not only is it a brazen assumption, it's pretty sexist to boot.

At this point, should we just feel grateful that he's not taking care of kids? Because I do, a little. Trump has gotten a lot of props for being a good old-fashioned family man. This latest ad throws that into serious question.

Given his own words, it's a little terrifying to think that this man is a father, a husband, and a son — and now, on the cusp of becoming the next president, in charge of acting as the country's face. What Trump thinks of his daughter, his wife, or his mother is seriously concerning. Even hardline supporters ought to be wary.

This new ad needs to go viral. Because this isn't hate-filled vitriol spewing from another candidate to gain votes. These are Trump's own words, put forth by a committee in his own party to try and have him ousted.

More Like This
Ginger Zee Had A Perfect Response After A Troll Asked Her "Who's Raising Your Kids?"
It's A Beautiful Day In Jenny Slate’s Neighborhood
35 Relatable Quotes That Prove Being A Mom Isn’t Easy
The FDA Is Warning Parents To Not Use Baby Neck Floats After One Infant Died