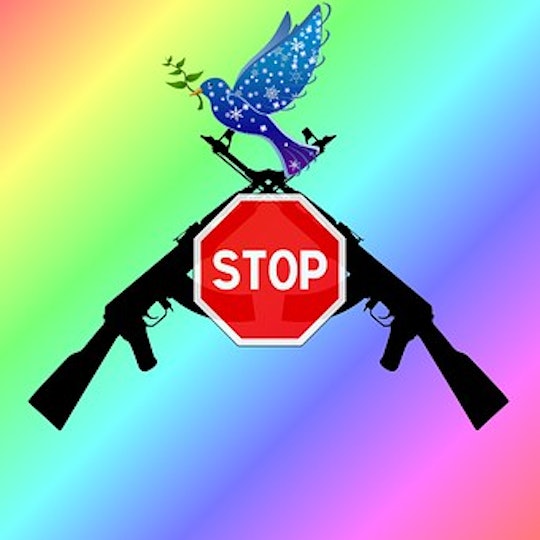 Violence has bred more violence in a truly nationwide phenomenon throughout the past week. First, two black men were killed by police in separate instances in Louisiana and Minnesota, sparking mostly peaceful protests all across the country. But the situation, characterized by racial tensions between law enforcement officials and African Americans, turned deadly again Thursday night when sniper killed five police officers in an ambush at a Black Lives Matter protest in Dallas. We're mourning all of these men, and searching for solutions to end the violence. Here are some anti-violence memes to share after the Dallas shooting, because the road to getting there is long and complicated, but a message of love and togetherness is a good place to start.

Many believe that the police shooting deaths of Alton Sterling and Philando Castile are symptomatic of a culture of racism in law enforcement. The argument has been going on for years, with some police supporters attempting to combat the #BlackLivesMatter movement with #BlueLivesMatter — although the two can't both be true at the same time.

The situation has become more and more polarized. The fact is, though, that there's no reason to pick sides. Instead, let's recognize that Sterling's and Castile's deaths may very well not have happened had they been white, while we also together condemn what happened in Dallas, because it was in no way representative of protesters.

Sharing anti-violence memes is a small gesture, but it can let others know you support your fellow Americans and understand that referring to the racial issues the United States is facing do not amount to a "race war" or "civil war." Saying they do is inflammatory, insulting, unproductive, and, yes, could perpetuate a sad, sad cycle and lead to even more violence.

From The Master Himself

What better place to start than with Dr. Martin Luther King, Jr., the ultimate advocate for nonviolence as well as addressing issues of racism astutely and, most importantly, effectively?

Because eschewing violence doesn't mean giving up on what you believe in.

And resorting to physical force is certainly not.

Two of these photos (I bet you can guess which), are from protests that happened in the past few days. They show protesters making powerful statements without guns or fists, and, for that reason, these images will endure as iconic testaments to the power of peaceful resistance.

It's not hard to see that violence erodes the essence of who we are as a country and alienates many of those who live here.

Just like the star-studded tribute song for the victims of last month's mass shooting in a gay nightclub in Orlando, "Hands," taught us, people are capable of so much more than destruction.

MLK's words are always relevant, especially after such a tumultuous, horrible week in the United States.

Peace, no matter the cause.

"The Only Thing They Don't Know How To Handle"

We expect no unnecessary uses of force from our police officers, and it's certainly possible to get there.

Well, solving the issues of excessive police brutality and the deadly attacks on police by rouge individuals those instances sometimes inspires may be anything but simple. But, as always, kindness and empathy are great places to start to build a dialogue.