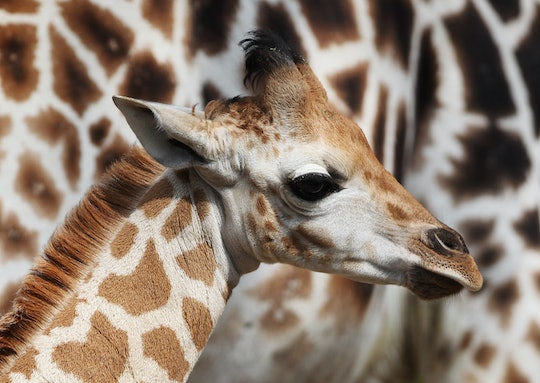 It's finally happened. After waiting for what felt like forever (seriously forever), an adorable new baby has been born. That's right, April the giraffe has finally given birth, after being pregnant for more than a year. So the next time you want to complain about how long your pregnancy took... remember April the giraffe. And then praise the heavens that you weren't born a giraffe.

After weeks of false starts, and even a rumor that April's pregnancy was simply an elaborate (and not especially funny) April Fool's joke, the 15-year-old giraffe gave birth on Saturday morning. April, who lives at the Animal Adventure Park in Harpursville, New York, has been the unwitting subject of social media mania for months, according to The Guardian. The YouTube live stream of her pregnancy has drawn, according to zoo owner Jordan Patch, over 30 million viewers and its fair share of controversy. Just this past Thursday, YouTube temporarily shut down the live stream due to an alleged violation of "nudity and sexual content," according to a post on the zoo's Facebook page:

Upset Youtube has suspended the LIVE FEED for nudity & sexual content? LET THEM KNOW You can thank Animal Rights Extremists for this issue.

Fans of the live feed were devastated, thinking their chance to witness the live birth of a baby giraffe had been cut off. Thankfully, YouTube restored it just in time.

On Saturday morning, Patch shared a statement on the zoo's Facebook page saying:

All observations, behavior, and predictions suggest a calf today, tonight — we would be shocked to get through the weekend without our newest addition. This is what we have all been waiting for! … We will keep the world posted.

And the millions of fans who had kept up a tireless vigil waiting for the unnamed calf rejoiced.

This is April's fourth calf, and now I need to share a little math. A typical giraffe's gestational period is around 13 to 15 months (this time around, April was slightly over, closer to 16 months). Which means the 15-year-old giraffe has been pregnant for one third of her life; five years. Yowsers. The proud father (who didn't end up being pregnant for over a year, just sayin;) is 5-year-old Oliver. This is his first calf.

Incredibly long pregnancy aside, I do sort of love how deeply involved the internet got in watching a giraffe give birth. Some might say it's a distraction, a way to anesthetize ourselves from all that's bad in the world. But maybe the fact that millions of people were willing to slow down for a baby giraffe on a Saturday morning is a sign of something beautiful.