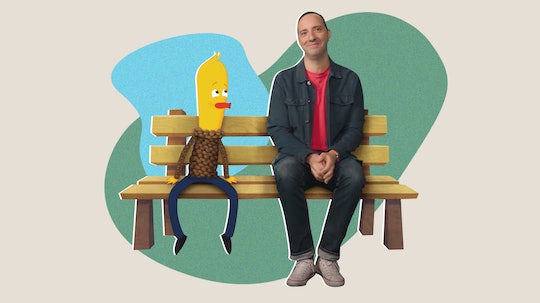 It's Day 436 of quarantine. Toilet paper is still, somehow, nowhere to be found. You are now an algebra teacher as well as a parent. Everything is fine. But when things aren't feeling so fine, the very funny Tony Hale, voice behind Toy Story 4's Forky and star of Archibald's Next Big Thing on Netflix, gives Romper a dose of positivity and upbeat energy we could all use right about now.

Like families all across the world, Hale, wife Martel Thompson, and 14-year-old daughter Loy are currently cooped up at home amid the ongoing coronavirus pandemic. To pass the time, they are Zooming with friends and having afternoon dance parties that will "never be videotaped and no one will ever see," says the dad with extreme dad-ness.

"We’re all in Contagion, it feels like," Hale says over the phone. "But, you know, [we're] making the most of it."

The second season of Archibald's Next Big Thing hit Netflix on March 20, as more school were announcing closures nationwide and public health officials were issuing stricter calls for social distancing. While times are undoubtedly tough, Hale says the relentlessly positive Archibald Strutter — the main character of the family-friendly animated show, which features a character, Archibald's sister, named after his daughter — is his "role model."

"He's a little chicken that tries to see the best in everyone and the best in every situation," Hale says. "I just feel like that’s something I’m trying to get better at and I think the world needs a lot more of that, especially now."

These past probably 10 years I’ve really been kind of digging deep into just trying to be more present and trying to reframe things rather than kind of create a 'what if' narrative in my head.

The happy-go-lucky chicken's way of framing things "in a very healthy, positive light" has also personally resonated with Hale. "I’ve struggled with anxiety a lot in my life," he says, "so these past probably 10 years I’ve really been kind of digging deep into just trying to be more present and trying to reframe things rather than kind of create a 'what if' narrative in my head or go to a … more critical place."

Another beloved character voiced by Hale, Forky, the lovable spork going through an identity crisis in Toy Story 4, has also left a touching, lasting impression on the actor. "I love that he came into this world with, like, 'my goal is to help people eat chili and go to the trash, that’s it,'" Hale says. "And then he finds out, like, 'oh I’m made to love and be loved.'"

In the newest season of Archibald's Next Big Thing, Hale is particularly fond of an episode called "House of the Future / Dr. Buttersocks" about wrestling — sock-puppet wrestling.

"These wrestlers all have these kind of tough personas and that’s what really brings the fans in... like a World Wide Wrestling thing. Archibald comes in and kind of teaches them how to all be friends and to just kind of get along," Hale chuckles.

Along with Archibald's curiosity and "wide-eyedness," it's silly storylines like this that make the show "so fun."

"There's always some kind of plan in the beginning of each episode and then life goes many different directions, as we're all experiencing right now," Hale says. As for Archibald, "his attitude is just like 'alright, let’s just go with it, let’s make the best of it and just be positive about it,' says Hale. "I think that’s always a good reminder for me and for kids."

Season 2 of Archibald's Next Big Thing is available now on Netflix.