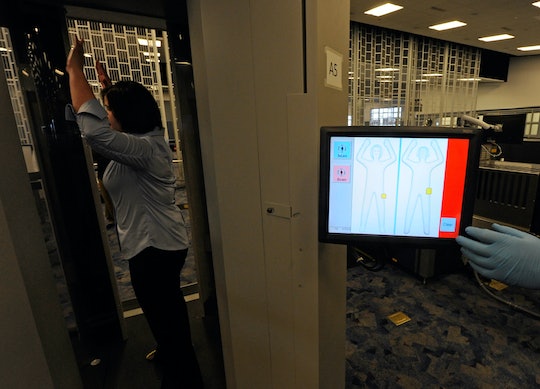 Here's The Deal With Going Through Airport Scanners During Pregnancy

For many pregnant mamas, they may feel like hitting the open road or flying high in the sky to go on a trip before their baby arrives — especially if it’s their first child. They call these little trips "babymoons" for a reason, as it’s sort of a last hurrah before the baby comes and you can travel child-free one last time and really focus on your partner. If you do choose to fly to your destination, how safe is it for your unborn baby, in the airport and on the plane? Are airport scanners safe during pregnancy? Is it safe to be on that airplane with all the cabin pressure?

According to the Transportation Security Administration (TSA) website, these scanners have been tested thoroughly to ensure the safety for everyone going through them — and that includes pregnant women. These machines apparently don’t use X-rays when they’re scanning your body, but “non-ionizing electromagnetic waves that are reflected off the body,” the website explained. And if you’re still worried, the website noted you can “opt-out” of the body scanner and instead ask for a pat-down screening by a female TSA agent. I asked OB-GYN and medical travel blogger Dr. Idries Abdur-Rahman, who is also one half of the twin duo TwinDoctorsTV, what "non-ionizing electromagnetic waves" means exactly, and he said they're like radio waves. "They do not have enough energy to disrupt cells or cause DNA damage," he says.

Dr. Yvonne Bohn, an OB-GYN at Providence Saint John’s Health Center in Santa Monica, California, agrees that airport scanners are safe in an email interview with Romper, however, you have a higher risk of radiation exposure while you’re flying in the actual airplane than the scanner. She adds if you’re worried about radiation from a scanner harming your baby, then you shouldn’t fly while pregnant since the radiation exposure is so much greater while you're flying. She says the radiation “comes from the sky.”

So how far along can you still safely travel in an airplane? Bohn says no flying after 36 weeks. Abdur-Rahman adds it’s not so much because of anything that could affect you or your baby negatively, but it is more a concern that labor and delivery could either happen at 35,000 feet or when you're far from home, your doctor, and your hospital. He adds, "37 weeks marks the point in pregnancy when you are considered term and the likelihood of labor goes up dramatically then."

So while you’re removing your shoes and belt and placing your laptop in the bins outside of your carry-on, don’t worry about whether the scanners will affect your unborn baby. They may affect your pride, but nothing more. However, if you are worried about radiation, you can opt out of the body scanner and ask for a “pat down.” Otherwise, get your babymoon and any other traveling complete before you’re in your 36 or 37th week. Have fun and safe travels.