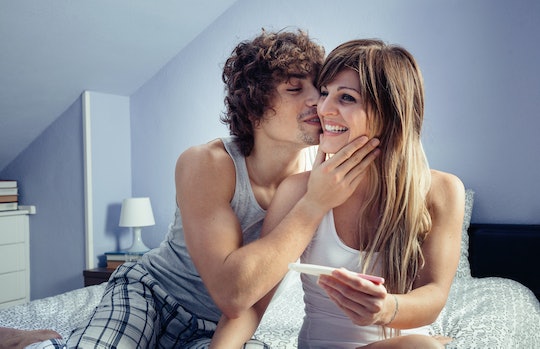 Are All Sex Positions Safe During Pregnancy?

More Like This
Can You Sunbathe During Pregnancy?
Is The Covid Vaccine Safe For Pregnant People?
Dreaming Of Fish? What They Mean If You’re Pregnant — Or Trying To Be
A Guide To Trying To Conceive & The COVID-19 Vaccine

According to the Mayo Clinic, sex is generally a safe and fulfilling activity when you're expecting. Unless you have a diagnosis that precludes you from sexual activity, like placenta previa or an incompetent cervix, you're pretty much good to go. But are their stipulations? Provisos? If the surgeon general slapped a warning on your big pregnant belly, what would it read?

Oddly enough, the surgeon general hasn't made this sticker, yet, but according to The March of Dimes, it's not the sexual position that is of much concern, as the safety of the sex, and the comfort of the mother. If you're with someone who has an active sexually transmitted infection (STI), or a new partner, The March of Dimes Association noted that it's very important that you practice safer sex — condoms, dental dams, the whole nine (month) yards. Also, there is a concern with anal sex. Not that backdoor action is discouraged during your pregnancy — according to March of Dimes, you can go for it — but don't let your partner go from backseat to front seat without a car wash in-between. There are germs in your boom boom room that you don't want in your pleasure palace. Infection is very undesirable during pregnancy, according to the Mayo Clinic. (And your vagina.)

The American Pregnancy Association noted that some sexual positions may not be as comfortable as others the further you progress into your pregnancy. Everything from loose joints that make sitting back on your knees painful, to a burgeoning belly that is just difficult to maneuver, can make pregnancy sex sort of tricky. Thankfully, there are myriad positions around for getting your freak on while you get your mom card, so that you can keep having fun. Just listen to your body, take a break if you need one, and enjoy — no sex position is off limits. (Unless you're just fed up of missionary.)