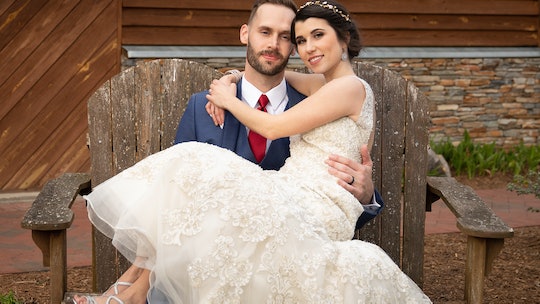 Where's The Tea On Amber & Matt's Relationship On 'Married At First Sight'?

Nobody does the leap of faith quite like the Lifetime reality series, Married at First Sight. With the show's ninth season moving to Wednesdays starting on Jun. 12 at 9 p.m. ET, MAFS jumps from Philadelphia to Charlotte, North Carolina, where eight singles will say "I do" to complete strangers. Two new members of the cast includes Amber Bowles and Matthew Gwynne, and with the premiere just around the corner, fans are becoming more curious about the status of their relationship. So are Amber and Matt still together after MAFS? Both reality stars seem to be open to the show's process, but Married at First Sight experts — psychotherapist Dr. Viviana Coles, sociologist Dr. Pepper Schwartz, and marriage counselor Pastor Calvin Roberson — could still have their work cut out for them.

For now, it's too early to determine whether or not Amber and Matt are still married after MAFS ends. The entire premise of the show revolves around the struggles and conquests of the couple's marriage, so it would make sense for Lifetime to keep tight lipped about the outcome. And while fans can typically uncover some dirt via social media, it appears that both MAFS stars are staying off the public's radar. Matt's Instagram profile is set to private and Amber's continues to remain a mystery.

From the looks of Matt and Amber's profile on Lifetime, the couple will have an interesting dynamic. Matt is an international basketball player who is seeking a partner who can adapt to his busy schedule. He also has a "strained relationship with his recently divorced parents, and wants a relationship where his partner is as devoted to athleticism as she is to him."

On the other hand, 27-year-old Amber is a middle school teacher who loves to travel and read. "She’s bubbly, energetic, and values her family immensely, which includes her identical twin sister and father," her bio reads. "She hopes to find a husband who is just as family-oriented as she is."

The descriptions are clear — Amber and Matt's current lifestyles are drastically different. But it's entirely possible that the couple can still make it work.

When the cast was announced for Married at First Sight, E! News reported bios that showcased Matt and Amber's openness and excitement in regards to finding their potential soulmate.

While the publication revealed that Amber wanted a "cheesy TV movie ending for her love life," Matt was "hoping the show will help him find a match."

Then in an interview with People, Matt explained why he decided to appear on MAFS.

“I’m getting married at first sight because I like to take risks. No risk, no reward,” the 32-year-old said. "I’m single. I’ve been a hopeless romantic my whole life, so why not?”

Meanwhile, Amber, who also identified as a hopeless romantic, revealed that she is in the same single-life boat as her soon-to-be husband.

“I don’t want to date anymore!” she said. “I’m so ready to start my forever.”

That said, this is MAFS. There will be plenty of bumps in the road. In a teaser clip courtesy of US Weekly, Amber admitted that she was still scared about marrying a stranger.

"I’m gonna be changing my whole life for a stranger and that scares me," the Lifetime star said.

Yikes. Although Amber's statement is fair, she did agree to be on a show titled Married at First Sight. Regardless, let's just hope both parties make it out at the end of the season unscathed.