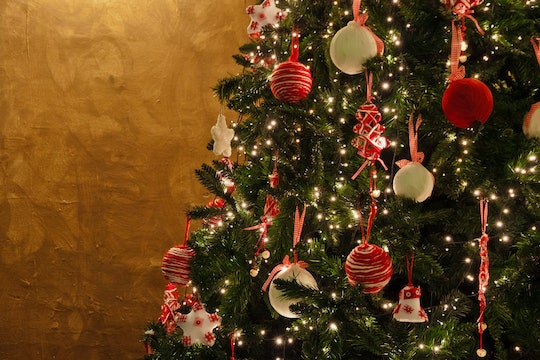 I freaking love the smell of fresh pine — and I'm allergic to it. As a kid, my parents always had a live tree. The moment it was upright, I would break out, would start sneezing like a maniac, and develop hives. It took them a bit to figure out that my reaction was the result of my allergy to a tree — thanks, mom and dad — and, when they did, they switched to an artificial tree. But allergies aside, are artificial Christmas trees safer than real trees? Experts say there are some things to consider, including which option is best for the environment.

"When it comes to real trees, some people really don't have a choice," Deemer Cass of UK-based Fantastic Gardeners tells Romper in an email interview. "Having a hay fever may bring hell with a real Christmas tree. Some molds grow naturally on them and they can cause hay fever-like symptoms to people suffering from asthma." In addition to an allergic reaction, Cass points out that live pine trees can also bring with them ticks and other bugs.

"These bugs, however, are adapted to living outside and will very soon die out indoors," Cass says. "They are by no means any threat to homeowners and their families." On the other hand, Cass says, ticks transported in your home from a Christmas tree may occur, but on a rare occasion. "Ticks survive from feeding on living big animals and a Christmas tree is not a suitable habitat for them," he notes.

In terms of a real Christmas tree being a fire hazard, Cass says trees become flammable only if they dry out. "Just make sure you water it daily and position it away from heat sources."

When it comes to being kind to the environment, artificial trees can be a solid choice, Caleb Backe, a health and wellness expert for Maple Holistics, tells Romper in an email interview. "But only if they are used for a certain number of years before their disposal," he says. Still, Backe says, a live tree doesn't pose the environmental loss that some people might believe it does.

"While cutting down a real tree does constitute a kind of environmental damage, this doesn't necessarily make it a more harmful long-term act, environmentally speaking, than purchasing and using an artificial tree does," he says. "The thing is, real trees decompose and return to the earth when they are disposed. So, while a tree is ripped from the ground for aesthetic and unnatural home use, it does in fact eventually feed into the circle of life, decomposing and feeding the growth of future trees."

Artificial trees, on the other hand, are potentially more problematic, Backe says. "Made of unnatural plastics and other non-biodegradable materials, when an artificial tree is disposed, it doesn't return to the ground and it doesn't feed the circle of life. More often than not it ends up in a landfill, harming the environment and doing more harm than it did good in preventing the killing of a real tree."

Backe points out that studies have suggested that an artificial tree must be used for as many as 20 years in order to make it the eco-friendly option. "Anecdotal evidence suggests that the average homeowner utilizes their artificial tree for far less than 20 years, meaning that more often than not, the real tree is the real green choice," he says.

In terms of an artificial tree being a fire hazard, Cass adds that artificial trees could also be a problem, "and being made from mostly PVC, they would emit highly toxic gases [should they catch fire]."

So, contrary to popular belief, the real Christmas tree might be the safer and healthier option. Now if I could just control these d*mn allergies.