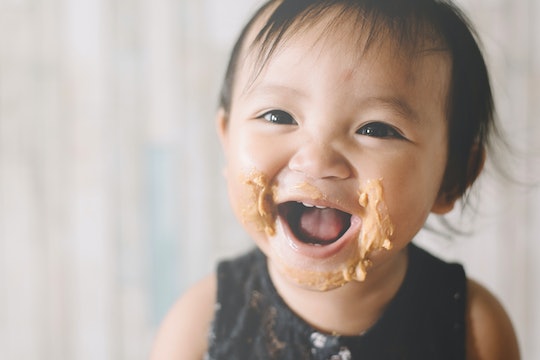 Let's be blunt: it's incredibly lousy to discover your kid has allergies. Children's allergies can range from mild to severe, but either way, they bring with them a whole slew of new anxieties for parents. Learning your little one has a pollen or peanut problem seemingly out of nowhere makes you wonder if babies born with allergies, or if they develop over time. The answer, of course, is a little complicated.

Dr. Alan Khadavi is a Los Angeles-based allergist who gave a very short answer when I asked him if babies were born with allergies: "No." It turns out that allergies are developed after a baby's exposure to the environment, but Khadavi says there is one thing babies are born with related to allergies: a genetic predisposition.

"It definitely runs in the family, and there is a strong genetic component," Khadavi says. "No one is actually born with them, as again, they need some type of exposure to the allergen. For some kids, there is some genetic predisposition, and when their body sees an allergen, it triggers a reaction."

Some mothers might worry that something they did while pregnant (something they ate or drank) caused their child to have allergies later. But Khadavi assured me this isn't so. "It's not the mother's fault. For some kids, there is just a genetic makeup that they will develop allergies, no matter what you do."

The recommendations regarding allergies have changed a bit over the years. While in the past, you might have heard that pregnant women shouldn't expose the fetus to things like peanuts or tree nuts, for fear of the child developing allergies to these foods later. But this is no longer believed to be true. The American Academy of Pediatrics reported that there's no longer any evidence to believe women should avoid eating nuts during pregnancy.

The recommendations for when to introduce children to peanuts has changed as well. While parents used to be told not to give peanut butter or nut butters until a child was a year old, they are now encouraged to expose babies much earlier. The American Academy of Allergy Asthma and Immunology stated: "Egg, dairy, peanut, tree nuts, fish, and shellfish can be gradually introduced during the same four to six-month window after less allergenic foods have been tolerated. In fact, delaying the introduction of these foods may increase your baby’s risk of developing allergies."

So how to test your little one out with potential allergens? Khadavi says to just try it at home. "Give a small amount, don’t introduce any other foods that day, then just observe them."

But if this makes you nervous and you feel like have good reason to believe your child might have a severe allergic reaction (perhaps the child has severe eczema, which is often a sign of food allergies, or perhaps there's a family history of severe reactions like anaphylaxis), then you might opt to try these foods out in the presence of a doctor. "Sometimes, if there’s a strong family history of allergies, parents do opt to do it in an office," Khadavi says.

More Like This
Abbot's Formula-Producing Plant Can Reopen In As Early As 2 Weeks — Now What?
Here’s What You Need To Know About That Viral 1960s Baby Formula “Recipe”
Can You Help Your Baby’s Hair Grow?
Here's When Your Baby Might Start Sleeping Through The Night For Real