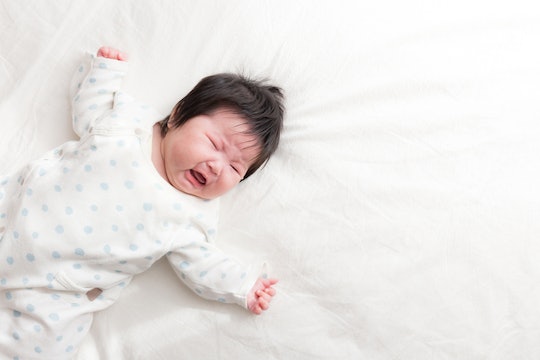 Here's What Babies Are Actually Afraid Of When They're Born, According To An Expert

I can’t remember a time when I was a kid that I didn’t have my nightlight shaped like a clown holding balloons. And ironically, I have been terrified of clowns as long as I can remember. Though not all kids are afraid of clowns, most kids have a nightlight throughout their childhoods to combat a fear of the dark. But when you’re creating your baby’s nursery, do they need a nightlight so they're not scared? Are babies born with fear?

According to Dr. Gina Posner, a pediatrician at MemorialCare Orange Coast Medical Center in Fountain Valley, California, babies aren’t really born afraid of anything. “Being scared is more learned behavior. They typically don’t react to anything that they have heard during the pregnancy — they are used to dogs barking (if there has been a dog in the house), thunderstorms, vacuum cleaners, etc.,” Posner tells Romper in an email interview. “Noises that they haven’t heard before might startle them, but inside the uterus it is very loud, so they are used to loud noises.”

That explains why my son didn’t initially jump or get startled when my ding dong beagle would ferociously guard our house from other dogs going on a walk. But when do kids tend to become scared of things? Posner says it can happen as early as before the age of 1, when they begin to be afraid of things that aren’t “usual” for them. As far as being scared of the dark, that typically doesn’t happen until they’re 2 years old, according to Posner. “By that age, their imagination is boundless and they start seeing shadows and just fearing various things. Some continue to have that fear, and others will simply grow out of it,” she says. So a nightlight might be necessary by the time your baby's a toddler, just FYI.

One thing that does startle brand new babies, if not “scare” them, is the startle reflex they're born with. Have you ever noticed your newborn suddenly thrash or cry as soon as you put them down unswaddled? “They have been floating for 9 months in a pool of warm fluid," Posner explains. "The last few months, it is a very tight environment. When you take them out of there and now they aren’t in a temperature controlled environment and tightly packed in, they do have a startle reflex. I wouldn’t say it is a fear of falling, they just like being tightly packaged and warm so that they feel like they did in utero.” Which explains the comfort of swaddling, right?

Even though it may take awhile to develop a healthy fear of clowns like yours truly, babies aren't really born with a fear of anything — having fear is learned. Other than loud noises that can sometimes startle them, or them having a startle reflex when they're on their backs, brand new babies are pretty darn brave. Until you get them a nightlight shaped like a clown. Then there's a serious possibility they'll be ruined for life.

More Like This
There's A Good Reason Why Your Baby Is So In Love With CoComelon
When Can Babies Hold Their Head Up? Experts Explain
20 Weird But Genius Health & Beauty Tools For Babies
23 Sweet Quotes To Dedicate To Your Rainbow Baby