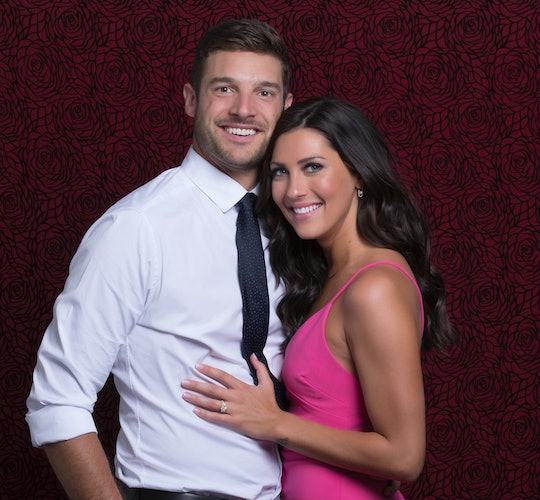 Becca & Garrett From 'The Bachelorette' Still Aren't Married Yet

After Becca had her heart broken on Arie’s season of The Bachelor, all fans wanted was for her to get her own happily ever after. That came in the form of the following season of The Bachelorette, where she met and fell in love with Garrett, who would later propose to her on the season finale. It’s been almost a year since it all went down and fans are likely wondering, are Becca and Garrett still together? The Bachelorette couple seem happier than ever. People reported in December that they have started looking for a house together after deciding their time between their own homes and Garrett’s family’s home in California.

"We’re going to be house hunting in San Diego," Becca revealed at the time. "His brother lives just north of there, so we’re gonna spend time with them for the holidays… we’re gonna I think just chill out at their place and veg and relax for a week because we haven’t been able to do that." While they also said that their wedding is still somewhere in the distant future, they’re definitely still going strong after Garrett got down on one knee and did the damn thing last season.

Although Becca and Garrett seem like they’re on cloud nine right now, Becca’s journey from The Bachelor to present day wasn't easy. As fans remember, she left The Bachelor engaged to Arie and the couple spent the weeks after enjoying their weekend couple getaways away from most of the cameras that had followed them in the beginning of their relationship. But during The Bachelor finale special, viewers saw that during one of their weekend getaways, Arie used their meetup to break up with Becca and admit that he had feelings for Lauren, who’d been a runner-up during his season.

It was the most heartbreaking and hard to watch segment in recent Bachelor history. Obviously Becca's light at the end of the tunnel was her own season of The Bachelorette to give out roses and find love on her terms and it seems like she’s found something legitimate with Garrett.

Usually in Bachelor Nation, first comes love, then comes an engagement televised for millions of viewers, and somewhere far down the line comes a wedding. As whirlwind as these romances are, the couples seem to have no problem with waiting to actually get married and you can't really blame them. Becca and Garrett also plan to prolong their engagement as they continue to get to know each other and each other’s families.

In December, Becca told Us Weekly at Sleep Number’s Under the Mistletoe event in New York City that they had absolutely nothing planned for their wedding yet. Garrett chimed in with, "I would say the fall of whatever year we choose because she loves the fall," so there’s that at least. Becca did, however, mention that the two things they've agreed on so far are having food trucks and Skee-Ball present at their nuptials. All I want to know is how to crash this particular wedding because the few details there are make it sound amazing.

Becca and Garrett aren't the only couple who decided to wait a little while after their televised proposal to actually get married. Rachel and Bryan from Season 13 of The Bachelorette still haven’t gotten married but they too appear to be going strong. JoJo, who starred in The Bachelorette Season 12, is also enjoying being engaged to her chosen suitor, Jordan. I just hope that when Becca and Garrett do get married, it’s a televised event for fans to see.