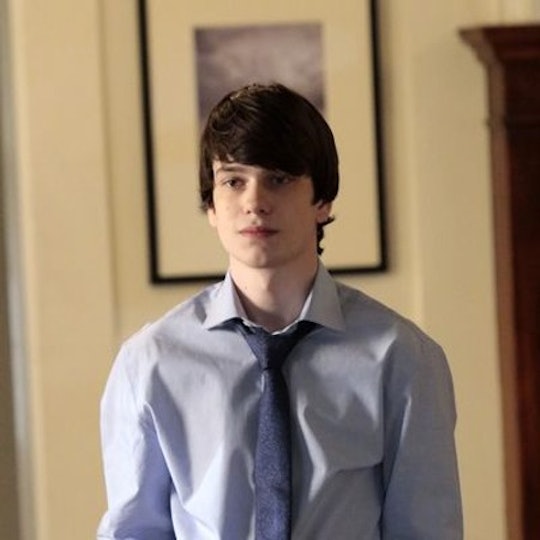 Are Ben & Doug Working Together On 'The Family'? The Secret Meetings Make It Seem That Way

Maybe it's because Ben so easily switches from a super sympathetic character to a mysterious, creepy kid, but after Sunday's episode of The Family, it's hard to shake the idea that he's hiding something even bigger than the identity of his former captor. Although it's clear that Ben was just as much of a victim as Adam was, the secret meetings we've been seeing make it seem as if Ben and Doug are working together on The Family. Call it a seriously intense case of Stockholm Syndrome, or call it being smart, but something is going on between Ben and Doug.

First, we watched the stressful as Hell episode where Doug walks right into the house while Ben is home alone, creeps up to his room and presents himself with a simple, "We need to talk." And all the while, Ben doesn't seem surprised or even scared. Come to think of it, before that, he locked eyes with Doug at the mall and while he ended up having a panic attack, its hard to say if that was born out of actual fear or if he did it to create a diversion to allow Doug to get out of there.

Then, in Sunday's episode of The Family, we saw another exchange between just the two of them, at the park, when Ben tells Doug that the cops are gaining on him. Which is pretty out there, considering most escaped kidnapping victims won't go out of their way so much in order to protect their captor way after the fact. Which brings us back to wondering, are Ben and Doug working together somehow?

Perhaps Doug blackmailed Ben into keeping him abreast of everything, while Doug kept Ben's secret identity a secret. We all know that he isn't Adam Warren and both the matriarch and sister in the Warren family are well aware of this too, but the possibility of that getting out could ruin the family and, very likely, his cushy setup with the Warrens.

This could be the only way that Ben would willingly work with Doug, right? Unless, of course, Adam is still alive somewhere and Ben is helping Doug keep that a secret so that Doug can keep one of his victims and Ben can keep living this intricate lie. And like I said, Ben's demeanor could indicate either of those options. Whether he tries to or not, the kid is a total baller when it comes to the secrets, twists, and turns of The Family. And with just a couple of episodes left this season, we expect the finale to finally give us a definitive answer on Ben's character.